1957: Lansing Community College is established. The "library" is a set of books on a windowsill in President Philip Gannon's office.

1960: First formal library was created in the Old Central Building.

1968: A second library is established in the new Arts and Sciences building.

1975: A small library is established in the new Gannon Vocational-Technical building.

1981: The library is the first in Michigan to provide a computer catalog for the entire collection.

1988: Plan devised to create one large LCC Library in the Arts and Sciences building. Dropped due to expense of moving the cafeteria.

1988: The Vocational Technical Library in the Gannon building closed.

1990: A new Vocational Technical Library opened in the Gannon building.

1991: A Blue Ribbon committee recommends construction of an academic services building to house the library and other services.

1995: Groundbreaking ceremony for the new Technology and Learning Center building.

1997: The three LCC libraries become one as staff and material move into the new library space in the TLC building.

1988: The library in the TLC building officially opens to the public in January, with a grand opening ceremony in March.

2014: The first One Book One LCC program, Immortal Life of Henrietta Lacks by Rebecca Skloot. 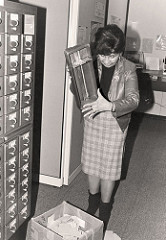