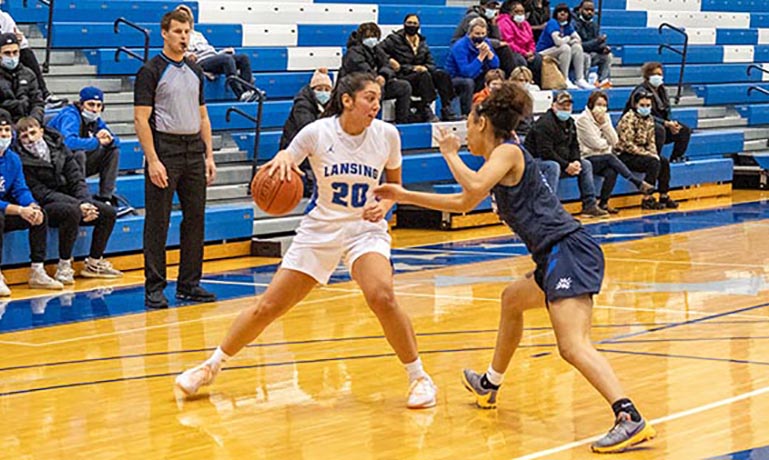 The LCC women’s basketball team lost its fourth game in a row on the road at Mid Michigan College, 82-38, on Tuesday, Nov. 22.

“I think the main thing that led to the loss was our inability to put the ball in the basket, in addition to not-great-effort on defense,” Ingram said.

The Stars were out-rebounded 41-24 against Mid-Michigan, something Ingram said is about having more want-to.

“I think it comes down to effort,” Ingram said. “You have to box out every play. You have to want the ball more than the other team, and they wanted it more than we did.”

Leading scorer Densmore attributed much of her success to her team and staff.

“My teammates help put me in a position where I get a lot of opportunity to score,” Densmore said. “My coach (Ingram) is also very encouraging when it comes to me scoring, so I feel I have gained a lot of confidence.”

This loss dropped LCC’s record to 1-4, with conference play set to begin on Jan. 14 at Glen Oaks Community College.

Even with the loss, Densmore said she stays optimistic and sees opportunity for improvement.

“It does suck to lose,” Densmore said. “But it helps us see where we went wrong, and learn from the mistakes we made, so we can better ourselves for the next game.”

With such a young team, challenges arise. Ingram said he believes it will take time to gel as one unit.

“Having seven freshman, everybody is going to need to be ready to have an impact,” the coach said. “So that’s what we’re working on, getting everybody ready.”

The loss has LCC searching for a bounce-back performance in its next game, the first home game of the year versus Detroit, on Friday, Dec. 2.

LCC’s home games will be played at Don Johnson Fieldhouse, located at 400 N. Pennsylvania Ave. in Lansing, until January, when the Stars are able to return back to Gannon Gymnasium on LCC’s main campus.