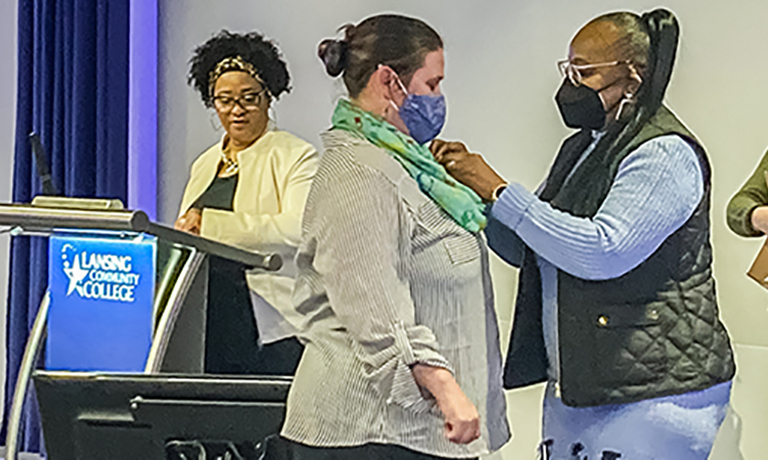 A pinning ceremony for the Women Inspiring Leadership through Empowerment (WISE) group was held Thursday, March 17 in the Gannon Building’s Michigan Room.

Participants had the option to attend in-person or online. There were 37 mentors and scholars in-person and 22 who attended via Web-Ex.

She expanded on what the WISE pin represents.

“The (pin provides an) opportunity to have tangible representation of their commitment to themselves and it marks the important steps they have taken to becoming leaders in their community,” Etherly-Johnson said.

For WISE Peer Mentor Erin Searles, this was the second WISE pinning ceremony she has attended. Last year, she was a mentee in the program. She expressed what the experience felt like this time around.

“It was really great,” Searles said. “I’m extremely excited to compare where I was last year to where I am now with this month's ATHENA principle. It was great to see everyone’s reactions to the event in person.”

The ceremony featured a guest speaker, and was followed by a WISE meeting afterward.

“WISE meets monthly on the third Thursday at 3 p.m.,” Etherly-Johnson said. “Scholars and mentors gather to learn more about the ATHENA International Leadership principles. We also hold … FAST 30 mentor/mentee sessions on the first Thursday of each month.”