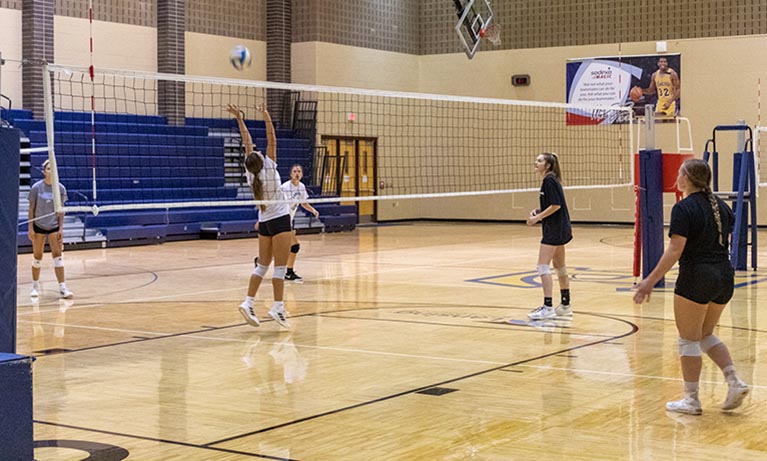 Members of the 2022 LCC volleyball team practice at the Don Johnson Fieldhouse in Lansing. Photo by Julie Newell

The LCC Stars volleyball season is underway and LCC Head Coach Emily Quintero said she sees a lot of reasons for optimism this season.

“I think we have a lot of potential to do some good damage for sure,” Quintero said.

The Stars volleyball team started off the season by competing in a quad meet at St. Clair County Community College on Wednesday, Aug. 24.

“It’s always a tough one because they play back-to-back-to-back matches and it’s exhausting,” Quintero said. “It’s the only time we will play three matches (in a row); other than that, for conference and districts, you will never play more than two a day.”

LCC won one match and lost two during the all-day marathon.

The Stars ended last season with an overall record of 14-18 and a 7-7 mark in the MCCAA Western Conference. This season, Quintero has set the bar high for the team.

“I have high expectations that we finish top, if not second, for the conference and then do some good damage at our districts tournament,” Quintero said.

Quintero said the team is young due to 10 new athletes on the team and only four returning players.

“We have some really great hitters, we have defense,” Sophomore Olivia Sabec said. “We do have new setters, but I’m super pumped about that. We have a really strong team right now and we are very strong willed, so I’m super excited.”

“Personally, I’m hoping to be a big contributor to this team and I hope we get to reach the top and win the championships overall,” Didion said. “It’s going to be a great season. I can tell because everyone gets along really well and there’s a lot of chemistry.”

“We got a lot of changes, but they’re adapting, I think, well to all the changes,” Quintero said. One of those changes is the renovation of the third floor of the Gannon Building. Due to this development, the volleyball team will now be practicing and competing in home games at the Don Johnson Fieldhouse, located at 400 N. Pennsylvania Ave. in Lansing

According to Quintero, another change that has occurred is the MCCAA Western Conference adding new teams and reconfiguring the conference set-up.

The Stars are scheduled to play at Owens Community College in the Owens Tournament on Friday, Sept. 2.