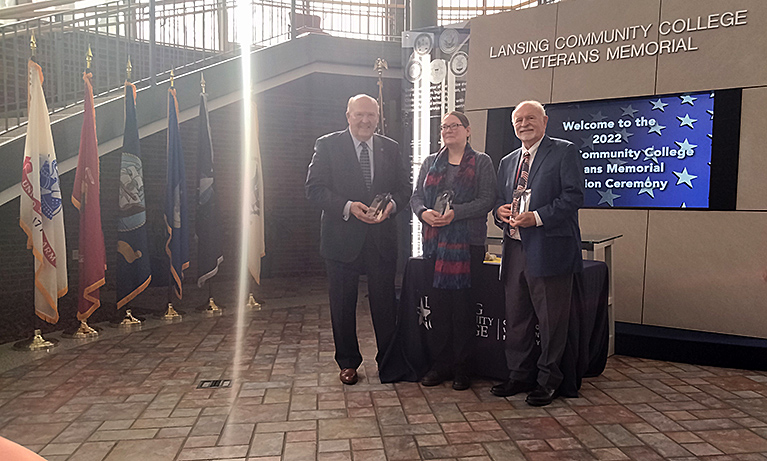 Pictured from left are Veterans' Day honorees Larry Meyer, Stefanie Kowalski (representing her grandfather, Charles Leighton) and Bill Motz. They are shown in the HHS building rotunda at LCC during a Veterans' Memorial Day induction ceremony. Photo by Jonah Unger

Three veterans were honored during a Veterans’ Day memorial ceremony in LCC’s Health and Human Services building rotunda Nov. 11. The event was attended by a large number of people, including LCC President Dr. Steve Robinson.

Director of Veteran Services Andrew Cosgrove was in charge of the event. He started off with a speech about the day-to-day life of a veteran, and the impact of it all.

“These men went on to become businessmen, teachers, farmers,” Cosgrove said. “Hardly anyone knew what they did for their country because they just didn’t talk about it.”

Cosgrove then proceeded to induct the three veterans into the LCC Veterans’ Memorial “ring of honor,” along with telling their stories. Each was also given a ceremonial token of honor.

The first of three to be inducted was Lt. Colonel Bill Motz, who served in the Army.

Motz entered the ROTC program while attending Michigan State University, graduating in 1967. In 1969 Motz was deployed to Vietnam for a six-month tour, and retired as a colonel after 27 years. Motz went on to teach at LCC and retired from teaching in 2020.

The second to be inducted was Lt. Commander Larry Meyer, who was in the Navy.

Meyer attended North Central College and graduated with a Bachelor’s Degree in science in 1964.

After college, Meyer enlisted in the Navy. He went on to become a communications officer for two years. He was eventually promoted to a lieutenant, and served until 1972.

“This is very meaningful to me and a wonderful gift,” said Meyer, a former president of the LCC Board of Trustees. “I’m glad we do this, it is very appropriate … We understand the role that the military has to play in protecting freedom.”

The third to be inducted was Captain Charles Leighton, a veteran of the U.S Army Air Forces. Leighton passed away a few years prior. His daughter was supposed to represent him for his induction in the past, but was unable to do so due to the pandemic.

Leighton’s granddaughter, Stefanie Kowalski, was there to induct him this year.

Leighton enlisted after high school, and worked his way up in the ranks. He was a navigator on a plane that would end up flying for 25 combat missions without losing a single crew member.

Leighton served until 1949. After that he earned his bachelor’s degree at Michigan State University. He taught math and science at East Lansing High School before retiring in 1978.

“Again he was probably one of those guys that nobody had any idea what he did (in the military),” Cosgrove said of Leighton.

Professionally produced videos about each veteran were shown after they were inducted. Cosgrove then thanked the people that showed up. There was food for everyone there, and people were able to speak to and congratulate the inductees and their families.