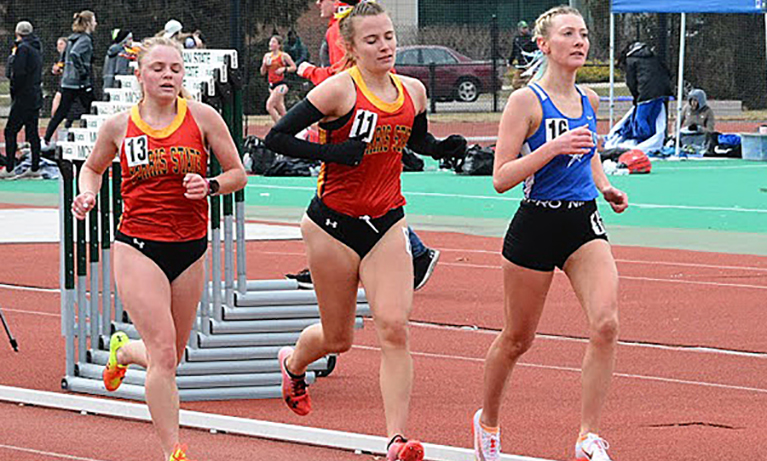 LCC's Haley Ellis (right) qualified for the national meet with a 5,000-meter time of 18:45 at the Spartan Invite on April 2 in East Lansing. Photo by Kristen Healey

The LCC men’s and women’s track and field season is underway. The Stars competed in their first meet of the season at the Spartan Invite at Michigan State University on Saturday, April 2.

According to Robinson, freshman Haley Ellis has already qualified for the national competition during the 5,000-meter race with a time of 18:45 at the Spartan Invite.

“We compete in Division 1 in track and field, so we go up against some big powerhouse track teams; that includes internationally,” Robinson said. “So, it’s not easy to score points; not easy to qualify for nationals. And once you get there, you’ve got to be (in the) top eight in the nation to score a point.”

The LCC women’s team has four sophomores and six freshmen this year.

“I really think we have quite a few women on the team who are going to run quite well,” Robinson said. “Even if they don’t qualify for nationals, they’re going to do very well for themselves.”

“Kayla Crawford – she is a returning sophomore – she ran a substantial personal best in the Spartan Invite and I think is only going to continue to improve,” Robinson said.

“Katie Slone, she did really well for us in cross country, but she is in even better shape this spring, so I think she is going to do really well.”

The LCC men’s team has two sophomores and 14 freshmen.

The sophomores are Kobe Blanco and Jackson Casper.

“I have a new freshman runner who actually transferred from MSU, Oliver Alvesteffer and he won his heat in 1:57 (in the 800-meter race during the Spartan Invite), which again, for his first track meet, is a really solid time,” Robinson said.

According to Robinson, a couple of the athletes also competed in shotput, hurdles and pole vaulting events at the Spartan Invite.

On the women’s team, Walker had a mark of 9.84-meter toss in the shotput.

“The goal in track is more individualistic than cross country, so a little more focused on running your best time,” Robinson said. “The secondary goal is to qualify people, put them in a position to score points at the national meet.

“I think we are going to be in a position to score some points this year. I wouldn’t be surprised if a third of our team qualifies for nationals.”