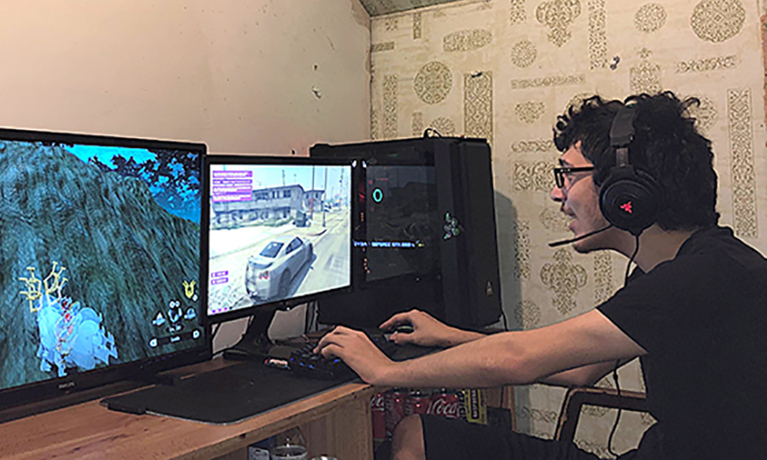 Although many students are forlorn to hear that many classes are still online, others are happy to have school from home. Christopher Soto is one of those people. He is currently taking all of his classes online.

Soto, 20, is majoring in Transfer Studies to finish all of his general classes at LCC before transferring to a four-year university, likely Central Michigan or Grand Valley State University. He said he is not sure yet what he wants to major in after LCC, but said having online classes has been helping him figure that out.

“I love that LCC offers their classes all online,” Soto said. “I’m a big home-body, so it works well for me that I can take all my classes online in the comfort of my home. My grades have improved significantly, too.”

In his free time, Soto enjoys playing on his PC, which he has done ever since he was a child. In particular, he loves playing the games Grand Theft Auto, Valorant and Minecraft.

“GTA is great because I can make new friends and role play the game with them,” Soto said. “It’s really cool being able to make a character that interacts with others’ characters. Minecraft, too, is fun for playing with friends. My friend and his (girlfriend) and I will play Minecraft servers for hours having fun.

“Valorant right now is probably my favorite game. It’s a free shooter game, but the graphics are amazing and it’s actually pretty tough, especially when you’re up against some good people.”

Kobe Corp, a good friend of Soto, said he is impressed with Soto’s ambition for both school and video games.

“Chris has never been a super-into-school kind of guy, but now he’s actually enjoying himself and his classes,” Corp said. “I think it has a lot to do with the classes being online. He can be working on some homework and hop on the mic to play Valorant a second later. I think it helps to motivate him.”