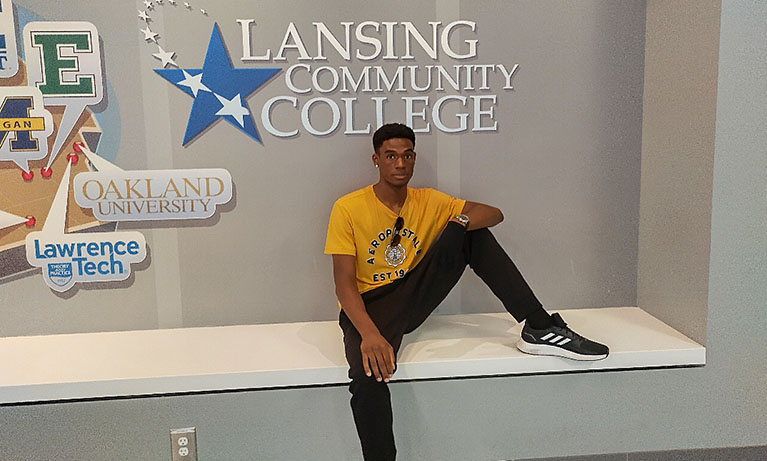 LCC student Hezekiah Cottrell said he has wanted to pursue a career in music since he was a small child. Photo by Mallory Stiles

It’s safe to say the year “Baby” by Justin Bieber came out was memorable for everyone. It played in every elevator, every car and every department store, seemingly on repeat, until we all were begging for it to stop.

Yet, as Hezekiah Cottrell sang it acapella in a random nook of LCC’s Gannon Building, it was like it was being performed for the first time. His voice reverberated off the walls and each note was held with strength, but the sound was all soul.

“I started singing at 4 years old,” the 23-year-old Cottrell said. “A lot of Elvis was played in my house, so I would sing and family would record me.”

“Hezekiah is motivated,” said Mario J., assistant program director at Power 96.5. “He shows up, he is dependable. He gets here on a bike. I have people who can’t get here in a car.

Cottrell said he knew he wanted to be a singer from a young age.

“The moment I saw Michael Jackson ripped and sweaty and moonwalking across a stage, I knew music was it for me,” he said. “I wanted to do that.”

A Lansing native, Cottrell has released over 70 songs available now on his YouTube channel. He will also be reporting the weather and ushering in jams on 96.5 FM from 2 to 6 p.m. on Sundays.

His chosen genre is bubblegum/teen pop, but he said his main influences are Michael Jackson, The Jonas Brothers and Justin Bieber.  Cottrell describes himself as an “independent pop artist.”

“It means you are your own manager,” he explained. “You perform. You get yourself there. You promote yourself. Being an independent artist just means more work.

“My favorite part is meeting other musicians. At LCC you can be a part of ensembles, choir, rock band, jazz band … All give you a chance to play the music you like with others.”

LCC means so much to so many. Cottrell’s story is proof that a good school is sometimes all you need to succeed.