Vaught has deep love for technology 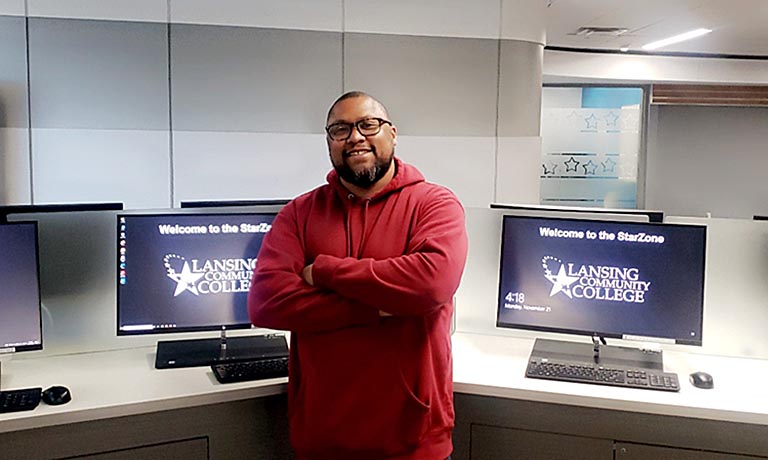 Student Taylor Vaught is working toward an associate degree in applied science.  Photo by Mallory Stiles

While some of us suffer through the winter months, shivering with every step and dreading every snowfall, some people consider it the best time of the year.

LCC student Taylor Vaught, 36, definitely enjoys the season and makes the most of Michigan winters.

“My favorite season is definitely fall or winter,” Vaught said. “I am a sweater and boots guy, so this is my time to shine.”

Vaught is on his way to becoming a computer support technician after graduating from LCC in a few months, with an associate degree in applied science.

“Currently, I am only taking an internship course because I am at the end of my program,” he said. “This is my last semester, so I set up an internship with PC tech here on the main campus. You have to complete 160 hours over a semester.”

In addition to his internship, he also works full-time in LCC’s StarZone as an enrollment support specialist, helping students achieve their dreams one click at a time.

“My favorite part of my job at LCC is working with a community that has such a diverse population,” Vaught said. “It’s really exciting to see people get through their programs, or see the same people around doing well.

“I recognize some students at graduations and it’s really fulfilling to remember I helped that student at some point. I really like making people’s days. A lot of the time, when people are frustrated, they just need to know what’s going on. I like being able to explain and help them move forward.”

Though he has chosen a career path based in all things electronics, Vaught’s first love was piano, which he started playing at age 6.

“This is not my first time going through school,” he said. “Initially my major was (as) a piano performance major when I was fresh out of high school.

“I ended up dropping out in 2007 due to family reasons. My mom had thyroid cancer and was having a lot of surgeries and chemotherapy. I was also trying to work to make some decent money and help out as much as I could. It was just a lot.”

His mother has made a full recovery and, though he has faced his fair share of struggles, Vaught continues to share his shine with everyone he comes in contact with.

Rafael Revilla, lead support in the Student Support Office, has been with LCC for seven years starting as an employee in the mail room. He has only fun stories to share about Vaught.

“When I first started working with Taylor,” Revilla said, “I was in testing services and sort of new to the non-physical side of work at LCC. Delivering mail doesn’t really prepare you for working with faculty, but Taylor was great about it. It was nice to have someone who was not only confident about what they were doing, but also had a great sense of humor about it.”

Revilla described Vaught as an asset to the team, naming his occasional practical jokes as one of his favorite parts of working beside him.

Vaught definitely knows how to keep things fun on and off the clock. Outside of school and work, when he isn’t traveling the world with his wife of five years, his hobbies are seemingly an endless list.

“My hobbies include playing video games … (and) wood working,” Vaught said. “I love messing up stuff out in the garage. Right now, my thing is 3D printers. I now have two 3D printers basically just making random stuff. Right now, I am excited to go home to finish working on a monster truck for my nephews.”

Even with all his aptitudes, technology is still his chosen path forward and has its own inspiring origin story.

“When I came back (to college), I had realized I enjoyed computers and working with technology quite a bit,” Vaught said. “Before I even started going to school for it, I was working at my previous job at a storage facility and someone left a TV behind.

“It could turn on but you couldn’t see much on the screen. After a lot of Google searches and YouTube videos, I was able to figure out that the backlight board was bad. I got a backlight board for $15 off eBay and installed it and it worked perfectly. That rekindled my love for technology.”