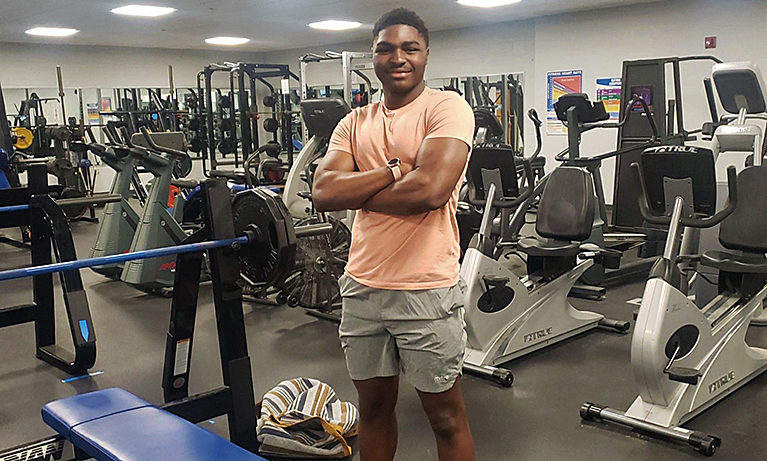 LCC student Justin Rukundo, a business major, enjoys working out in the LCC gym on a daily basis.  Photo by Mallory Stiles

The Center for Disease Control and Prevention recommends that the average adult gets at least 75 to 150 minutes of exercise per week.

LCC Student, Justin Rukundo exceeds expectations at 19 by exercising for over two hours every day in the LCC weight room. He describes the atmosphere as “inclusive and helpful.”

Though fitness seems to be a passion of his, Rukundo is following another path in life. He is currently majoring in accounting and minoring in business.

“I am good with numbers and I want a job that’s stable with a high income,” Rukundo said. “Business attracts me because I want to own my business one day. My dad has a business degree from MSU, so I plan on going into business him.”

Rukundo, currently taking 12 credits, is enrolled in four classes. He is taking Business Law, Diversity in the Workplace, Applications for Living and Principles of Economics.

Coming from a very large family, Rukundo is very family-oriented. He continues to enjoy the time he has with those he loves.

“I am one of 10 children,” He said. “The youngest is currently 4 and the oldest is 21. Having a big family is enjoyable because I am never lonely. ‘Monopoly’ is very big in our family.”

Rukundo works part-time for Grand Rapids Building Services, Inc. He said he hopes to get an internship at a local business after getting his degree in accounting.

He said his parents set the bar high, each with a number of their own degrees.

He shared that he was actually born in another country.

“I was born in Berundi, Africa,” Rukundo said. “I came to the U.S. in 2007 when I was 4 years old. I was young, but I can remember a lot of things; mostly just watching my brothers and my parents run around.”

“We moved here because of a war. Long story short, there was a lot of stuff that happened that traumatized my parents. All I know, is that there were people trying to kill them so they ran. But the other people caught up, forcing them to hide in bushes almost every single day while they carried my siblings and I.”

Rukundo said his family saw a lot of death.

“My parents never specified who we were running from, but we were on the run,” he said. “A lot of their friends died.”

Anson Than, 20, went to high school with Rukundo, and is also taking classes at LCC. They can often be spotted studying hard in the cafeteria.

“Justin is very enthusiastic,” Than said. “Even when he tells me he is sad or having a rough time, he still brings smiles to people’s faces.”

”I have never seen someone as dedicated as him when it comes to trying to support his family. Justin didn’t come from the luckiest of beginnings, but he makes the most out of his resources and tries to improve as best he can despite his upbringing.”

Rukundo said he has a deep love for music, and has been playing drums since he was 17.

“I come from a family of musicians, my brothers play music too … drums, keyboard, bass,” Rukundo said. “They inspired me to play. I was more of a singer than a musician, but they taught me how.

“When I play music it just hits the soul. I feel the beat, I feel the rhythm and I just play …”

Music has been a major part of his life, and that love began in his church, Pentecostal Fellowship of the Holy Spirit, where his father is the pastor.

“I have been in church my whole life,” he said. “My best memory of church is when my family and I composed and performed a song of our own for the entire congregation.”

Rukundo speaks two languages in addition to English, his first being his native language known as “Kirundi.” This language was taught to him by his parents to pass to future generations.

He also speaks the language of Anime, from which he found his favorite quote: “You may have invaded my mind and my body but there is one thing a Saiyan always keeps … his pride.”