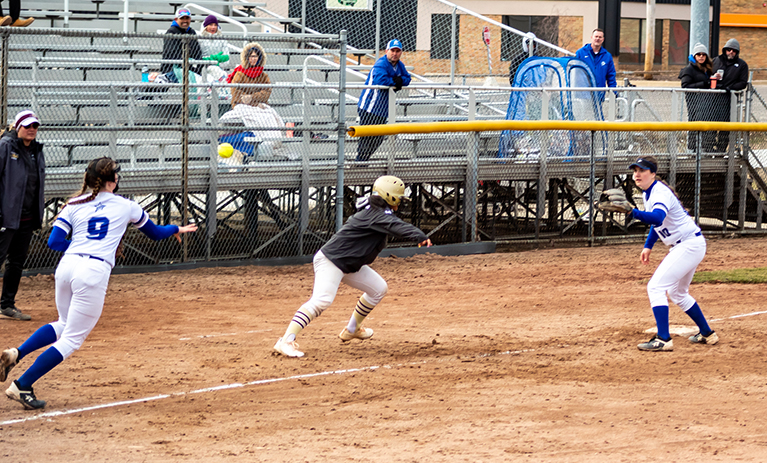 LCC softball players Morgen Ahlfeld (9) and Shelby Warner trap an opponent in a pickle during recent action at Ranney Park in Lansing. Photo by Julie Newell

The LCC softball team swept a doubleheader 23-6 and 20-2 against Ancilla College on Monday, May 2 at Ranney Park in Lansing.

This win put the Stars’ overall record at 23-19, and at 21-7 in the MCCAA Western Conference. These two games officially ended the team’s regular conference season, according to LCC Head Coach Marc Kibby.

“We finished in a tie for second in our league,” Kibby said.

Freshman Lydia Davenport led LCC on the mound in the opener, pitching three of the five innings and registering four strikeouts.

“Lydia has been throwing well,” Kibby said. “Actually, she has won her last eight games; doing really well for us on the mound.”

Sophomore infielders Shelby Warner and Kara Mahoney led the Stars on the plate, both had four hits, including two home runs each.

“If we could just do that (hitting well) all the time, I would be a happy coach,” Kibby said.

In the nightcap, Morgen Ahlfeld led the Stars on the mound, pitching three out of five innings, facing 11 batters and throwing five strikeouts.

Mahoney and Bird led LCC at the plate with a home run apiece.

“Our bats are alive and well right now,” Kibby said.

Kibby commented on how he felt about the team at this point in the season.

“I feel real good right now,” Kibby said. “It looks like, hopefully, this team is peaking at the right time.”

According to Kibby, the Stars have one more non-conference game scheduled and then head to the NJCAA Great Lakes District Championship.

“I feel pretty confident in what we’re doing and where they’re at so we can just go out and play the games,” Kibby said.

The Stars will play at home against Mott Community College on Thursday, May 5 at Ranney Park in Lansing. Action starts at 5 p.m.

The NJCAA Great Lakes District A Championship Game is scheduled for Thursday, May 12 in Stevensville.