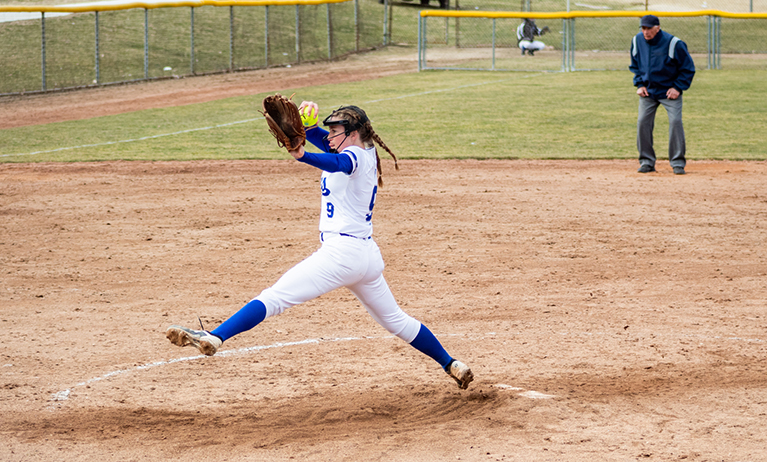 Morgan Ahlfeld earned a win against Mid Michigan College on April 5, giving up two hits and striking out 13 batters. Photo by Julie Newell

The two wins put the Stars overall record at 10-14. LCC improved to 8-2 in the MCCAA Western Conference.

In the opener freshmen Peyton Perrin and Jillian Harris each had two hits for LCC. Sophomore Shelby Warner led the Stars with three RBI.

“Morgen Ahlfeld was the winning pitcher in the second game, giving up two hits (and) one earned run while striking out 13,” Kibby said.

In the nightcap, Warner led the Stars with two hits. Sophomores Jada Walton and Kara Mahoney each had two RBIs in the second game.

“We are still playing inconsistent softball right now, that being because of the weather,” Kibby said. “We need to be playing more games and not (having) all the rainouts going on.

The Stars are scheduled to play at Glen Oaks Community College on Friday, April 8.

“They will be ready for us,” Kibby said of Glen Oaks. “We are always the team to beat.”