Silver Bells in the City News 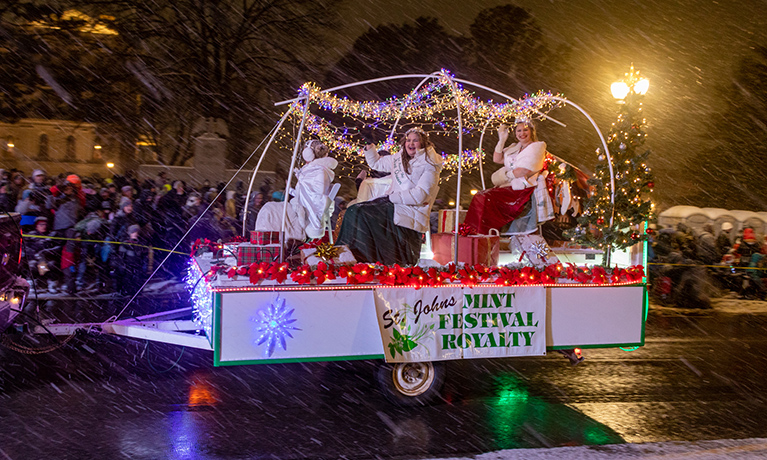 A float promoting the St. Johns Mint Festival rolls down Capitol Avenue in downtown Lansing as the snow flies during "Silver Bells in the City," held Nov. 18.  Photo by Julie Newell

The 38th "Silver Bells in the City" celebration lit up Lansing on a snowy night, Friday, Nov. 18.

The festivities started at 5 p.m. with the Silver Bells Village, with vendors filling the 100 block of East Allegan Street for attendees to shop.

At 6 p.m. the 25th annual Electric Light Parade began. It featured floats, cars and marching bands from companies, organizations and schools all over the greater Lansing area.

High school student Tramy Vo, who is dual-enrolled at LCC, commented on the festivities.

“This is my third year at Silver Bells,” Vo said. “I love seeing my school marching band walk past ... and the lighting (of the) tree at the end.”

Following the parade, attendees made their way over to watch the lighting of the State Capitol Christmas tree.

Megan Gage and her boyfriend Parker Grover said they attended Silver Bells for the first time last year and decided to come back again this year.

“I also like the tree lighting a lot, even though we just missed that by maybe half a minute last year,” Grover said. “We’re going to be around to see it this year.”

After the lighting of the tree, 20th season American Idol contestant Jacob Moran, who is originally from nearby Dansville, Mich., took the stage while a 200-drone light show was set up.

The drones then took flight next to the Capitol building, forming into a variety of shapes and patterns while being synchronized to Moran’s music.

To finish off the event, fireworks exploded over the Capitol, much to the delight of the thousands of people in attendance.