'Romeo and Juliet' coming to campus 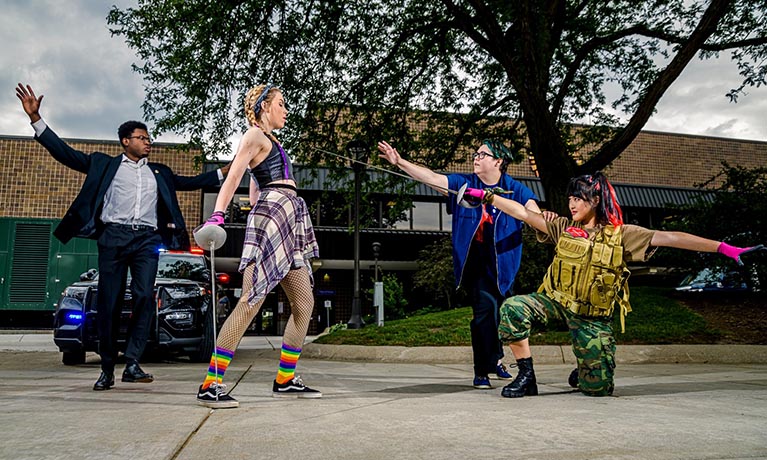 LCC Performing Arts will present “Romeo and Juliet” on its outdoor amphitheater from Wednesday, June 22 to Sunday, June 26 at 7 p.m.

This production will be directed by new theatre faculty Kevin O’Callaghan, who has made some adaptations to the piece to reflect his own concept.

“I am really excited for people to see this production of ‘Romeo and Juliet,’ which I am calling ‘R&J: The Protest Version,’” O’Callaghan said. “(This is) because Shakespeare wrote the play at a time of great religious and political turmoil in his country.

“After the events of Jan. 6 (2020), and everything else happening in our country and the world, it felt like such a timely story to tell. So, we went ahead and set it at a protest. It's going to be quite a theatrical experience under the stars.”

The story will be told in a more contemporary fashion as far as fights, costumes and music. This production will also feature a queer love story.

“I think representation is so important and I think we are making really brave, bold, personal choices with this show that I hope audiences will really connect with,” O’Callaghan said. “I'm really excited for people to see the hard work of this cast.”

LCC has brought in an artist-in-residence for this play: Paul Molnar. Molnar is an LCC theatre alumnus who has had a very successful career in both professional and academic theatre for the past 30 years.

For this production, Molnar will be playing Juliet’s father, Capulet. Molnar also served as fight choreographer for the play.

Capulet, according to Molnar, is a seemingly overbearing brute who pushes his power on people and tries to marry off Juliet to Paris, not having realized Juliet has already fallen for Romeo.

“The challenge for me as the actor is to find the hero in Capulet,” Molnar said. “Playing a character that seems to be the bad guy in a play is a trap for actors. It paints the character as two-dimensional.

“Like all of Shakespeare’s characters, Capulet is complicated; complex. Juliet's father is actually trying to heal the divide in the community … He tries to lift the spirits of the family by having this marriage. He is trying to fix the problem, trying to force joy. It's complicated and messy, and great fun to play.”

Molnar said working with the many talented young actors in this production brought him back to when he got his own start acting in summer Shakespeare.

“I am brought back to my beginnings, 30-plus years ago, right here on this campus doing summer Shakespeare for the first time, and seeing wonderful actors who went from mentors to cast mates to colleagues,” Molnar said. “I look at acting as an apprenticeship. We learn from those who have gone before … No matter where you are on the journey, you are never too old to learn.”