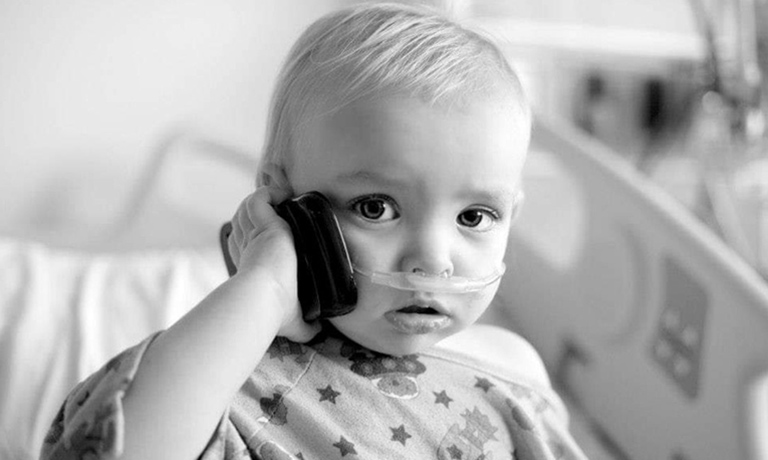 Ella Hannon is shown during her bout with RSV when she was just over 1 year old. Ella is now 11.  Courtesy photo

Babies and the elderly across the country are gasping for breath, and lacking beds to do so, because of a surge in a virus known as Respiratory Syncytial Virus, or RSV.

The country possibly faces what is known as a “tripledemic” if the number of people infected with the flu, RSV and COVID-19 continues to rise this winter.

The uptick in RSV cases is currently a major concern because there is no vaccine available to the public> In addition, the U.S. healthcare systems is already strained after two years of the COVID pandemic.

Rebecca S. Schein, M.D., of Sparrow Hospital, is also an assistant professor of Health Programs at MSU with affiliations in Pediatrics and Human Development. She recently donated a few minutes of her time to address the situation.

“My main concern is with young children,” Schein said. “RSV can cause significant breathing problems and they often need breathing support or oxygen. Right now, the issue is that there are so many children with RSV that the hospitals are getting very full.

“Right now, we are seeing very high rates of RSV across the country. There are also high rates of flu, particularly the H2N2 flu. … Most of the flu cases right now are still in the southern U.S. Now if they are in the southern U.S. they are likely to spread here. But the question is, ‘By the time we get them here are RSV rates already going to be dropping or remaining high?’”

Schein said that COVID-19 rates are currently low in mid-Michigan, making the possibility of a tripledemic low, at least locally. However, she did want to remind the student body of what we it can do to stay safe.

“First of all, if you are sick, stay home,” she said. “Don’t go out, that’s a big one. Cover your cough and wear a mask if you do need to go out when you’re sick, and wash your hands. RSV is spread entirely by contact with the droplets that you emit when you cough or sneeze.

“Other things your fellow students can absolutely do is to get themselves vaccinated for the influenza and COVID-19, because if they can help decrease the number of people in the hospital that would just make life easier for all of us.”

Megan Hannon, mother of four girls and owner of Megan Hannon Photography (recently mentioned in People Magazine), has experience with the virus. She said she still remembers the fear of it all.

“My second child, Ella, was just over 1 year old and just learning to walk when she contracted RSV,” Hannon said. “I knew she was really sick because she had a terrible cough and her breathing just felt different. It was more labored, there was a lot of wheezing. Her oxygen was so low that she was admitted immediately to the ICU upon our arrival.

“It was so terrible. I never knew how terrible RSV was until Ella got it. She was in the intensive care unit for six days and when she was released she had to relearn how to walk. To this day, she is our kid who gets sick most often. Whether that’s because of RSV, I don’t know.”

The aging and elderly are also considered high-risk RSV patients. Lori Starr, 60, recently recovered from a case of RSV that attacked shortly after a bout with COVID-19.

“I started feeling RSV symptoms on Wednesday,” Starr said. “I just felt a little under the weather. Thursday, I felt like I was getting the flu. I felt flu-ish … You know, the body aches.”

“Friday, I started getting a cough but didn’t think that much about it. But by my last hour of work that day, I could not quit coughing. It was really deep. It was taking everything out of me.”

Starr said she was admitted to the hospital for care the next morning, but given little relief once the virus had taken hold.

Dr. Schein did confirm that there are now currently three vaccine trials for RSV, all of which are in something known as phase three, usually the final stage before getting FDA approval.

After the vaccines are FDA approved, they can be administered to larger quantities of people for final screenings of symptoms not shown in the study, bringing them one step closer to being released to the public.

On Nov. 1, Pfizer was the last of the three companies to announce its vaccine trial had advanced to phase three.

“This one that Pfizer is talking about is showing good promise in protecting against RSV when given to pregnant women,” Schein said. “That is a hopeful thing because the people who get the sickest are young babies, so maternal antibodies can cross the placenta and your baby could be protected for up to 18 months. So, it could potentially protect babies for that first year of life.”

Schein did warn that these advancements were promising, but that the release date of a vaccine could be years away. She advised that people lean on what they know works, such as washing hands and covering coughs, in the meantime to protect themselves and their communities.

Both Hannon and Starr said they would take the vaccine without hesitation once it is made available to the public.

“I would get it,” Starr said, “As bad as I was, I never want to be that sick again. It was terrible. It was the worst sickness I have ever felt in my life.”