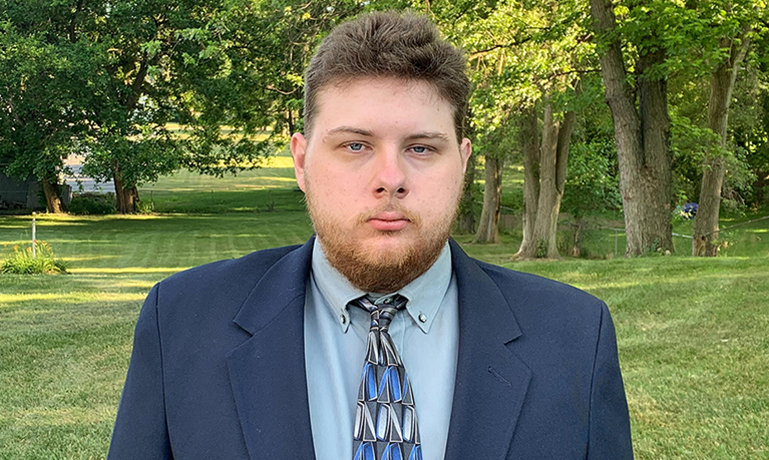 Adam Alexander is a regional officer for Phi Theta Kappa, representing the State of Michigan and LCC. Courtesy photo

Congratulations are in order for Adam Alexander for his recent election as a regional officer, representing the State of Michigan and LCC, and for his EDGE contest win.

Alexander is a member of Phi Theta Kappa, an honors society chapter that students can join at LCC. Through this chapter, Alexander has risen through the ranks and excelled.

Through Phi Theta Kappa, Alexander was elected to the position of regional officer of the Michigan Region. With this new position come many more responsibilities, according to Alexander.

“Some of the new responsibilities of mine … include helping to plan the various conventions for the Michigan Region Chapters of Phi Theta Kappa to take part in,” Alexander said.

“One of my favorite conventions is LOC, our Fall Leadership Convention that, while in person, is held up near the sandy dunes in Leelanau. I get to help plan what fun activities and workshops members will get the fun chance to experience together with my team.”

Other responsibilities for Alexander include speaking at various colleges and PTK ceremonies. However, his most important responsibility is to help better the Michigan Region, whether between chapters or at Phi Theta Kappa.

“This role to me is a dream come true,” Alexander said. “Being the first regional officer from Lansing Community College in the history of the Michigan Region is something I never thought was possible. Being able to represent not only LCC, but also the Mu Tau Chapter, our local chapter here, is certainly an unreal experience.”

Along with winning the election for regional officer, Alexander also won the EDGE contest. The EDGE contest is geared for each chapter officer to complete five different and insightful programs: Research, Competitive, Transfer, Employment and Healthcare. There was a chance to win in each category, which Alexander accomplished.

“For me, I completed them not because of the contest, but because I found them insightful and would help to improve my skills both personal and leadership-wise,” Alexander said. “Due to winning, I get a free Michigan Regional Convention pin and a Research EDGE pin, and I will wear them with great pride alongside my other five I have for completing them prior.”

Through all of this, Alexander is currently an LCC criminal justice major under a digital evidence specialist, going for his AAS and CC in the same field. He plans on applying for his CC in computer programming/analyst as well at LCC.

After graduating from LCC, he plans to continue his education at a university to receive his AB in computer networking and cybersecurity. He said he enjoys computer science work and wants to expand his knowledge in this field.

“Adam has proven to be an outstanding student at LCC, committed to PTK values, and an advocate for diversity, equity, and inclusion (DEI) initiatives,” Gradilla said. “He is the first LCC student to be elected as a PTK regional officer for Michigan. We are confident that Adam will do a great job representing us at the regional level.”