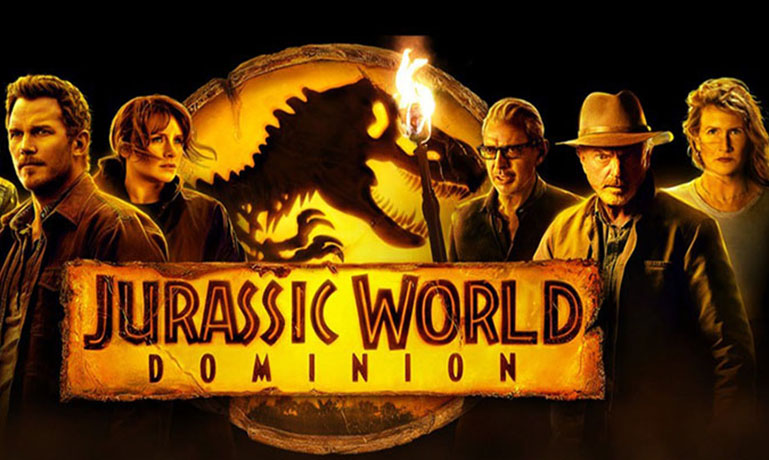 I am reviewing the latest installment of “Jurassic World” titled “Jurassic World: Dominion.” It is available to see in theaters, as well as on Peacock, the streaming service.

This action-packed, dinosaur-filled thriller is two hours and 26 minutes long. It stars familiar faces Chris Pratt (as Owen Grady) and Bryce Dallas Howard (as Claire Dearing), among others, and is rated PG-13.

The movie takes place in a world where dinosaurs have now joined in modern times, living amongst humans and the animals we know today.

The plot centers on new science. Disguised behind the greater good, this science has become a detriment to society, and could threaten the extinction of humans.

We see a young girl, Maisie Lockwood (played by Isabella Sermon), who holds key information within her.

Lockwood becomes the subject of a search from Biosyn, a large science company, to try and pry this information away.

Along the way, there are new challenges, plenty of dinosaurs, and some familiar actors from past movies, including Sam Neil, Laura Dern and Jeff Goldblum.

This movie was one I would definitely watch again. It was not the best “Jurassic World,” or “Jurassic Park” movie I’ve seen, but it was an extremely fun watch.

The acting in the movie is fairly good, and the plot does line up well with the previous films. I loved to see the old mix with the new. I think it added a great dynamic, which almost patched some of the more rough aspects of the movie.

The animation is the only issue I took with the movie. It seems within the last few movies, it’s not drastically improved, even though animation itself, as a whole, has. The animation is not bad by any means, but also, looks similar to movies that were released more than five years ago.

I rated this movie 4 out of 5 stars. I am a huge fan of the “Jurassic World” and “Jurassic Park” movies, so it hit home for me, and brought back some nostalgia from my childhood. You can never go wrong with action, dinosaurs and a little bit of humor within a movie.