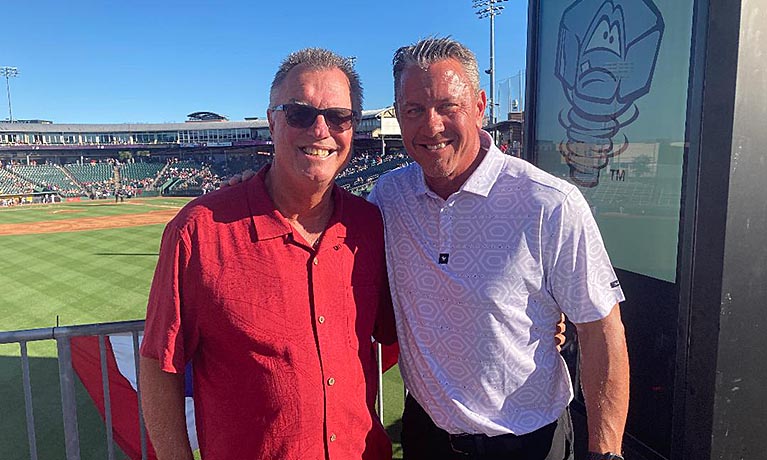 Frank Tanana (left) and Steve Avery gather for a photo near their new Michigan Baseball Hall of Fame plaques at Jackson Field in Lansing. The two said they are friends, and occasionally play golf together. Photo by Larry Hook

By Larry Hook
Adviser of The Lookout

The induction ceremonies took place at Jackson Field, home of the Lansing Lugnuts, before the Lugnuts’ game against the Great Lakes Loons.

Tanana and Avery participated in the ceremonial first-pitch activities before being officially inducted into the Hall. Lugnuts Broadcaster and Media Relations Specialist Jesse Goldberg-Strassler led the ceremonies.

“It’s a reward for a lot of hard work,” Tanana said of his induction into the Michigan Baseball Hall of Fame. “The Good Lord kept me healthy for all those years. I loved the game, had wonderful health, tremendous parents, coaches and guys I played with. It’s quite an honor.

“(There have been) a lot of ballplayers that played baseball in the state of Michigan. To be voted as one of the top players certainly is quite a thrill.”

Avery said he was also thankful to be an inductee.

“It’s a great honor, and to go in with Frank, it’s even better,” Avery said. “I grew up watching him. (I was a) big Tigers fan.

“It’s exciting. Not many people from Michigan make it to the big leagues, just (because of) our weather and all that. So to be able to do that is just a really special accomplishment. I’m really proud of that.”

Tanana, now 69, was born in Detroit and starred as a prep at Detroit Catholic Central in Novi. He was drafted 13th overall by the California Angels in 1971.

Tanana was an All Star in 1976, 1977 and 1978 for the Angels, teaming up with Nolan Ryan to form one of the most potent one-two pitching punches in baseball history.

Tanana pitched for the Detroit Tigers from 1985 to 1992, compiling a 96-82 record in eight seasons. He said the greatest moment of his playing career came when he won the final game of the 1987 season to clinch the Eastern Division title for the Tigers.

“We ended up winning 1-0,” Tanana said. “We needed to win it to clinch the division. I pitched nine innings of shutout ball, which I never did back in those days. By far that was the highlight of my career.”

Avery was drafted third overall by the Atlanta Braves in 1988. Three years later, in 1991, he was named Most Valuable Player in the National League Championship Series, going 2-0 and pitching 16 1/3 scoreless innings.

In 1995, Avery helped the Braves win their first-ever World Series title. He was the winning pitcher in game five of that series.

“I’m always a big team guy, so winning the World Series in ’95 was just a special occasion,” Avery said. “We had lost two of them previous to that, and then to finally get over the hump and win it was exciting.

“Personally, in ‘91, being 21 years old and winning the NLCS MVP and going to our first World Series was special, too.”

The Michigan Baseball Hall of Fame is in its eighth year of existence. Its purpose is threefold: to honor the state’s baseball heroes of yesterday; celebrate the national pastime today; and inspire baseball fans and ballplayers of tomorrow.

Biographies, accomplishments and photos of the inductees can be found at www.michiganbaseballhall.org.