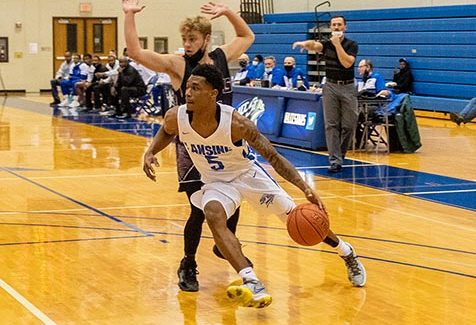 The LCC men's basketball won 87-80 against Jackson College on Saturday, Jan. 8 at home in the Gannon Gym.

"I thought that we played pretty good against a talented team that was big and had great size (and) was athletic," LCC Head Coach Mike Ingram said. "Like when we played Kellogg, we were able to control it at the end and then make some plays on defense and execute some plays on offense to win."

The win put the Stars overall record at 9-4 and at 1-1 in the MCCAA Western Conference.

"This was a game where I felt like we played really well as a team, including most of the starters in double digits for points," LCC freshman Sean Cobb said.

"It was a really encouraging game overall, since we played solid defense and were efficient on offense," Cobb said.

"Throughout the year, we have been constant on offense, but our defense has struggled a bit," Cobb said. "But if we can keep up the defense we played in that game (against Jackson College), we will win a lot of games."

Ingram commented on some things the team could improve on.

"I think if we can shore up our rebounding that we would really be a good team," Ingram said. "I'd like to see our three-point shooting improve."

The Stars are scheduled to play Saturday, Jan. 15 at Grand Rapids Community College.