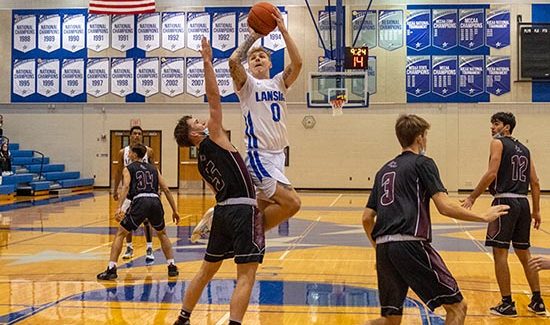 In the first game of the new year, the LCC men's basketball team lost 90-88 to Kellogg Community College on Jan. 3 at home in the Gannon Gym.

The loss put the Stars' overall record at 8-4, and at 0-1 in the MCCAA Western Conference.

We did not play well in the second half, which led to a loss, Freshman Sean Cobb said.

Despite the loss, freshmen Cole Krause and Cobb each scored 16 points and grabbed six rebounds for the Stars. Sophomore Drew Lowder led LCC with six assists.

It was a rough game to play, but (there are) a lot of things we can learn from it, Cobb said.

Ingram said he still has high hopes for his squad.

I think we are going to be the best team at the end, but we got some things that we need to work on, Ingram said.

The Stars are scheduled to play on Saturday, Jan. 8 against Jackson College at home in the Gannon Gym. Action starts at 3 p.m.