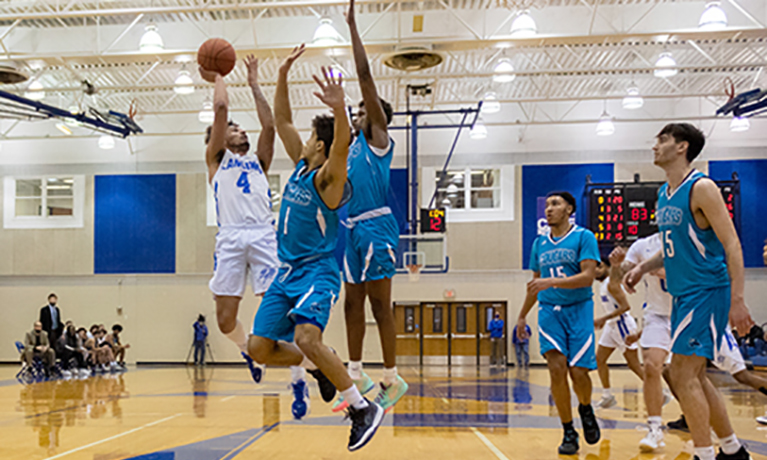 “We won it,” LCC Coach Mike Ingram said. “We won the league outright with this win and we’re going to host the state championship game here on Monday, so I’m excited.”

LCC is scheduled to host the MCCAA State Championship game in the Gannon Gym on Monday, Feb. 28, where the Stars will play Macomb Community College. Action starts at 7 p.m. The winner will be the state champion.

Against Kalamazoo Valley, the Stars were battling the whole game to find their rhythm.

“I thought we played pretty good, but defensively we weren’t there, and Drew wasn’t having the game we were used to him having,” Ingram said. “And Cole (Krause) and Sean (Cobb), they stepped up.”

This win put the Stars’ overall record at 21-7 and at 13-4 in the MCCAA Western Conference.

“We always come out slow in the second half for some reason and we gave up the lead,” freshman Cobb said. “Fortunately, we were playing well enough to get it back and eventually Drew hit that game winner. There’s nothing more exciting than that.”

“We struggled a little bit offensively as a team, so we just had to turn up our defense as much as we could,” Lowder said. “I think we really kicked it up the last 10 minutes of the game. A couple guys in particular – Cole Krause, Sean Cobb, Jyon Young and Zhervonte Smith – they all really picked it up for us … so that throughout out struggles we were still close enough, in striking distance, to throw the final punch.”

The Stars are scheduled to play a makeup game on Friday, Feb. 25 against Lake Michigan College at home in the Gannon Gym, prior to the state championship game on Monday.