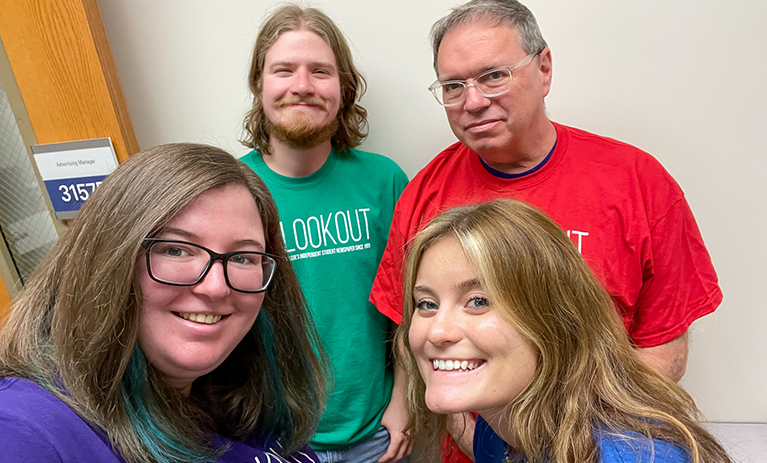 The Lookout earned a total of nine awards in the competition, which is administered by students and staff at Central Michigan University. The awards were announced Wednesday, April 20.

“I think it’s great,” The Lookout Editor in Chief Julie Newell said. “I’m really impressed with our team of employees. We’ve definitely worked hard and I really think we deserved what we won. I’m so happy and excited for everyone.”

The Lookout tied for first place in General Excellence with The Washtenaw Voice from Washtenaw Community College.

“To me it was a tough choice between the LCC Lookout and The Washtenaw Voice,” McFarland Friedman said. “Both papers had strong writing, articles that were relevant to their audience, plenty of great art and the layout was great.

“From a layout standpoint you really had two different styles, more of a magazine style with LCC and more of a traditional newspaper design with Washtenaw. Both were done very well. It was nearly
a tie in my book, but I felt LCC just barely edged out Washtenaw.”

In addition to the General Excellence award, The Lookout also earned the following awards:

Second Place – Best News Story: Chloe Gregg for her story about a woman being assaulted on LCC’s campus;

Second Place – Best Editorial: Chloe Gregg for the staff’s opinion on the state tax being eliminated on menstrual products;

“Nine awards is an amazing showing for our staff, considering we started the year with just five employees and are completing it with only three,” The Lookout Adviser Larry Hook said.

“I was pleasantly surprised that we earned the General Excellence award with such a small staff. I am very proud of our student/employees who have worked so hard this school year to bring the news, sports and student events to our LCC readers during this school year.”

“I’m proud that we were able to get General Excellence,” Gregg said. “I’m happy that everyone was able to receive some recognition and that we can celebrate with each other.”