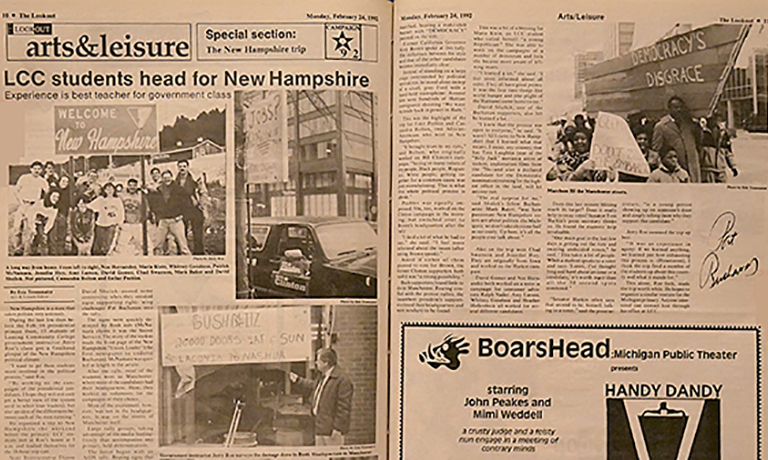 The front-page story is about a student being dismissed from student government because he had been distributing condoms on campus. The student, Todd Heywood, had been the chair of the Campus Issues committee for LCC’s student government.

“The ousting was due to the improper distribution procedure of condoms after a recent AIDS awareness program put on by the Black Child and Family Institute of Lansing, an action student government said did not follow procedure,” The story stated.

“It should be noted, that at the time of publication for this article, the college by its own admission has no official condom policy.”

The school administration would claim that Heywood violated procedure by distributing items on campus instead of on the perimeter of campus.

The article gives the opinion of several students who said they think he was ousted because the school was afraid of damaging its image.

The situation would evolve into legal action by Heywood, and even drew the attention of the American Civil Liberties Union (ACLU).

This story comes from a time when the HIV epidemic was a new and important issue for many Americans. Sexual health and how involved schools should be remains an issue today. I suspect even now some students’ parents would be uncomfortable with the idea of their children being given free condoms.

This edition also included a story about a trip taken by students in a government class to New Hampshire to be exposed to the Presidential primaries that were taking place at the time. The students had the chance to work as volunteers for the campaign of their choice.

The students were exposed to the fierce political climate, and saw firsthand how aggressive politics can be. The students who planned to help the George H. W. Bush campaign had to find something else to do when the campaign office was closed due to damage from protestors.

The government class instructor who went on the trip, Jerry Roe, said, “If we learned anything, we learned just how exhausting the process is.”

This sort of hands-on learning seems like it would be very informative, but I would be curious to know if the college would feel it is safe to get students involved in the divisive politics of today.

Page 3 of this edition covers a story about crime on campus. The story takes a look at the struggles of finding police records of incidents on different campuses around the state at the time. LCC appears to have been at the forefront of making crime records accessible.

The LCC Director of Public Safety at the time, Ronald Roush, said LCC had an open-door policy regarding crime records.

The transparency of law enforcement is an issue that is very prominently discussed today. It is nice to see LCC has made efforts to be transparent for a long time and, even now, crime records can be easily accessed on an LCC website.

This story is also a great example of one that is similar to the sort of stories we write today. Just a few months ago our own Chloe Gregg wrote a story reporting on the release of the most recent crime statistics at LCC.

This edition did not have many shocking revelations about the past, but it offered a quick glimpse into some of the challenges of the time.