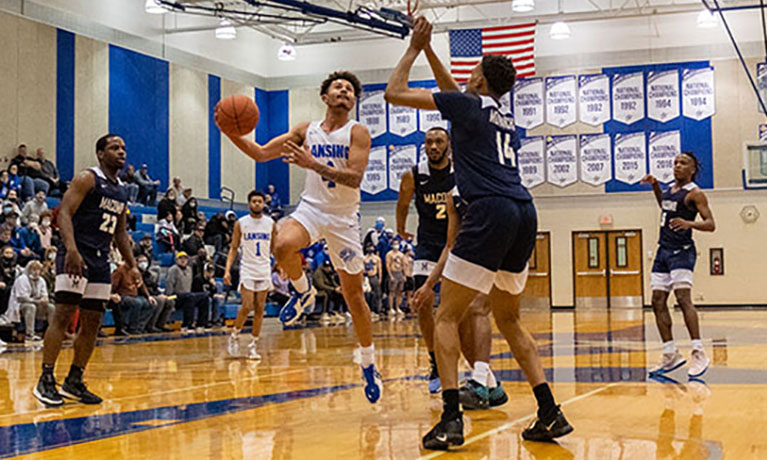 LCC's Drew Lowder knifes through the defense during action in the LCC gym. Photo by Julie Newell

The LCC men’s basketball team ended the season with a 92-84 loss in the NJCAA Great Lakes District A championship game against Muskegon Community College on Saturday, March 5 in Flint.

“We were really playing well,” LCC Head Coach Mike Ingram said. “We were up 10 at half and we had a strategy that we were going to start off in the second half with, and it didn’t come up.”

The loss ended the Stars’ season with a 23-9 overall record, and a 14-4 mark (good for first place) in the MCCAA Western Conference.

“It ended up coming down to - just like in the state championship game - we weren’t able to get rebounds,” Ingram said. “We were getting stops, but we weren’t getting rebounds.”

“I thought that I pushed all the same buttons that we pushed to get to the district championship, it just didn’t work out like it had before,” Ingram said.

For the season, Lowder led the Stars with a total of 800 points and 185 assists. Sean Cobb grabbed 284 rebounds to lead LCC in that department.

According to Ingram, the only players, so far, who will not be returning to play next season are sophomores Lowder, Zhervonte Smith and Mitchel Skym.

“For us coming back and playing against a bunch of teams that played last year, and for our guys to come in and not ever (have) played, they did a heck of a job,” Ingram said. “I thought that we had a great year. We did some great things.”