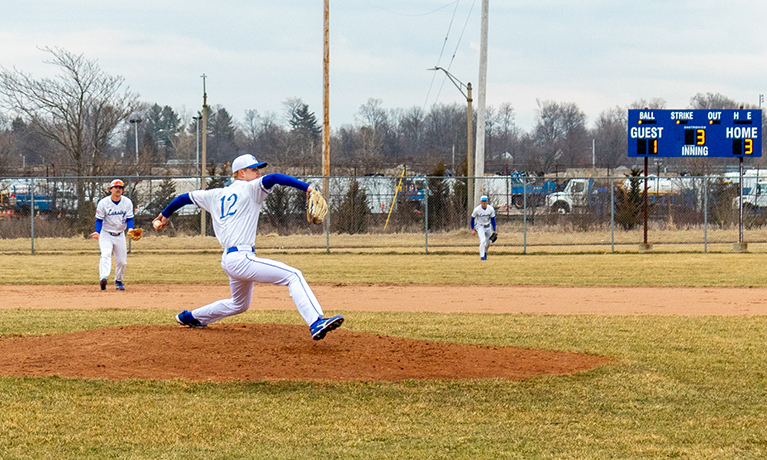 LCC’s baseball team swept a doubleheader Tuesday, March 29 against Schoolcraft College, 8-4 and 5-0 at Kircher Municipal Stadium on Lansing’s east side.

“The Stars opened up play at their new home stadium against Schoolcraft and secured victories in both games in front of a cold, but large crowd,” LCC Head Coach Steven Cutter said.

The wins were the seventh and eighth straight for LCC. It put the Stars’ overall record at 10-5, and at 4-0 in the MCCAA Western Conference.

“Brendan Beaver was the starting pitcher in game one, and he threw five innings while scattering four hits and two runs,” Cutter said. “Freshman pitchers Nick Baidoon and Cole Heikkinen entered the game to close out the game in relief.”

In the opener, freshman Shane Juday had three hits. Freshmen Noah Bright and Hunter Lay each had two RBIs.

Freshman Blake McRae and Lay each had two hits in the second game. Freshmen Robert Cavin, Chris Hege, Juday and McRae each had one RBI.

“We really are playing well defensively and pitching at a very high level right now,” Cutter said. “We need to improve our approaches at the plate to help drive up pitch counts on opposing pitchers.

“We have won our last eight games, and we are fighting daily not to get complacent. Baseball is a funny game when it comes to that kind of stuff.”

The Stars were scheduled to play at Macomb Community College on Friday, April 1.