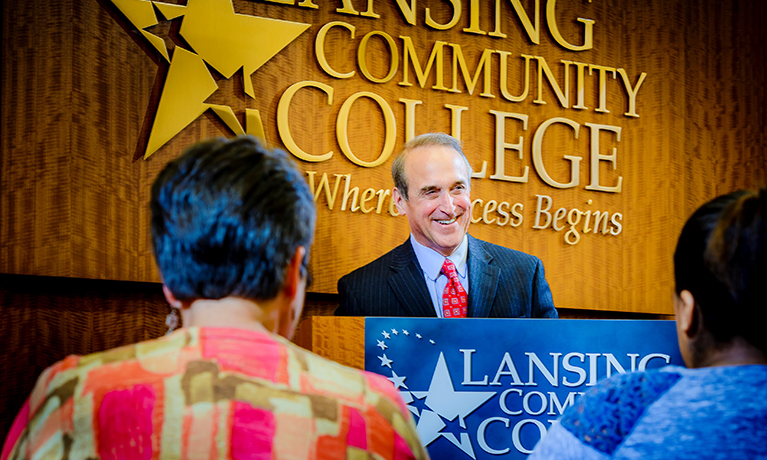 LCC’s previous president of 12 years, Dr. Brent Knight, has been awarded with the American Association of Community Colleges (AACC) Leadership Award and inducted into the new AACC Hall of Fame in New York.

"I am delighted and honored to be in the community college hall of fame,” Knight said. “I was privileged to be a community college president for 29 years; a most rewarding career. Although I was president of five colleges, my work at LCC was especially meaningful.”

Knight retired in 2020 from LCC at age 72. During Knight’s 12 years of leadership and innovation, he transformed the face of LCC with various renovations and additions.

He is responsible for some 27 sculpture installations across LCC’s campuses, including his final sculpture project at the center of the downtown campus, the soaring, 43-foot “Upward Bound.”

“I have known Brent for over 40 years, and he has not only been an outstanding professional colleague, but a great friend that I have been able to call on for advice and counsel.”

In 1976, at age 29, Knight was named president of Triton College, becoming one of the youngest college presidents in the nation.

Prior to becoming LCC’s sixth president, he was president of Morton College and vice chancellor of Baton Rouge Community College.

Along with Dr. Knight, five other people were inducted in the new AACC Hall of Fame, all of them presidents at different community colleges across the country.

Knight said he is honored to be one of the charter members of the new AACC Hall of Fame.

“I thank the members of the board as well as the faculty and staff for their good work and support in my 12 years in Lansing,” Knight said.