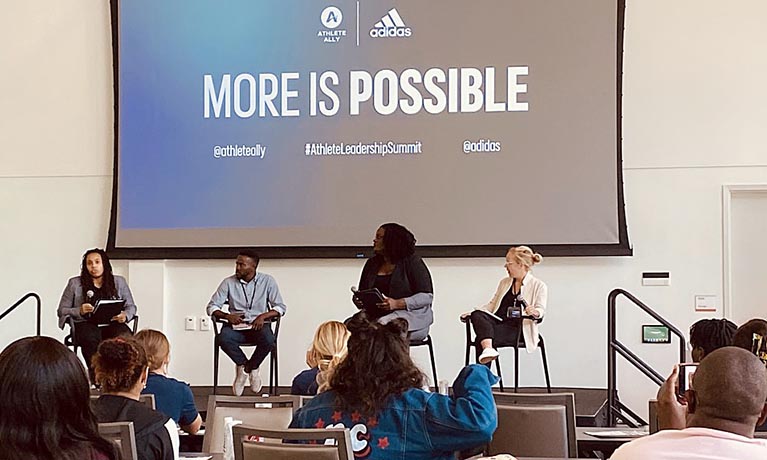 LCC Special Projects Coordinator and Women’s Basketball Coach Layne Ingram was a panelist at the three-day Athlete Leadership Summit at the University of Miami in Florida from Aug. 5 to 7.

The Summit was hosted by Athlete Ally and Adidas. Athlete Ally is a nonprofit LGBTQI+ athletic advocacy group whose mission is to educate and advocate athletic communities about the LGBTQI+ community and equality.

“The Athlete Leadership Summit brought athlete ambassadors and other advocated together to discuss progress and next steps in driving inclusivity nationwide,” according to an LCC press release.

The panel Ingram was on was moderated by Roc Rochon of Rooted Resistance, Tiffani Tucker from UNC-Wilmington and Dr. Anna Baeth from Athlete Ally.

“We discussed barriers that athletes, specifically LGBTQIA+ athletes, face in college athletics, from discrimination to harassment to having to decide between playing their sport and being themselves,” Ingram said.

The event included a series of panels, breakout sessions and brainstorms on how to create safe sport spaces.

“It was very humbling to be asked to be on this panel,” Ingram said. “I am always excited about any opportunity to share my story and experiences in the hopes that it helps someone else.

“To be part of this with the other extraordinary panelists who are doing such great work was an amazing feeling and I’m honored to have even been considered.”