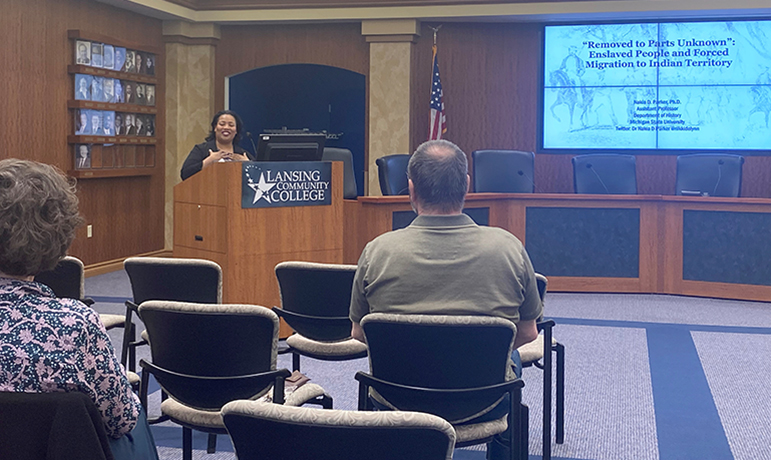 Dr. Nakia Parker, assistant professor of history at Michigan State University, speaks in the LCC Boardroom during her keynote speech on April 28. Photo by Chloe Gregg

The series began on Thursday at 6 p.m. with Parker’s keynote speech, titled “‘Removed to Parts Unknown’: Enslaved People and Forced Migration to 19th Century Indian Territory.” During this presentation, Parker shared her research on Native Americans as slaveholders.

Kevin Brown, a history professor at LCC and the main contact for this series, gave opening remarks before the presentation.

“My research highlights that (many of these Native American slaveholders) began moving westward (in the U.S.),” Parker described. “An important argument was to determine whether or not slaves should receive rations on the journey, such as food and blankets.

“It was decided that the slaves were property of the emigrating Indians, and therefore should receive rations.”

On Friday at noon, Dr. Parker hosted a WebEx event where she led a more informal conversation about her career path and how she went from a community college to receiving her PhD in history.

For more information on the history program at LCC and its upcoming events, visit this website.