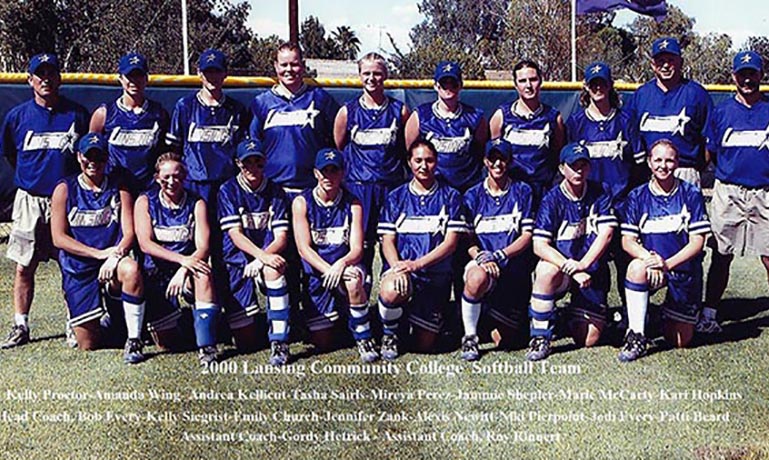 LCC’s year 2000 softball team is being inducted into The Greater Lansing Area Sports Hall of Fame.

The induction ceremony for the team, and for this year’s other inductees, is being held on Thursday, July 28 at 4:30 p.m.at the Lansing Center, home of the Greater Lansing Hall of Fame.

Hall of Fame Chairman Bob Every explained how the LCC team was chosen for the honor.

“There’s a selection committee of 12 people and they are people with various backgrounds in sports and athletics, in and around the greater Lansing area,” Every said. “Then the team was nominated, as are many people. It was just their time. I mean what they did and what they accomplished was unbelievable.”

Not only is Every the chairman of the Hall of Fame, but he worked at LCC for 38 years and was the coach of the 2000 softball team.

According to Every, LCC didn’t have a softball team for nearly two decades, until July of 1999. That was when the LCC Board of Trustees agreed to add baseball and softball to the college’s athletic roster.

“So, we went from not even having a program in July to the first day of practice in September to the College World Series championship game in May,” Every said. “I thought that was pretty extraordinary.”

Every’s daughter, Jodi, played on the 2000 softball team and was the first athlete on the team to be awarded All-America honors that year. She had a .457 batting average that season.

“We put together a good program,” Every said. “The 11 years that I was (coach) at Lansing Community College, we were in the College World Series eight times. And the four out of the eight years we were in the World Series, we played for the national championship four times.”

For more information on this year’s inductees, or to purchase tickets, visit the Hall of Fame website.