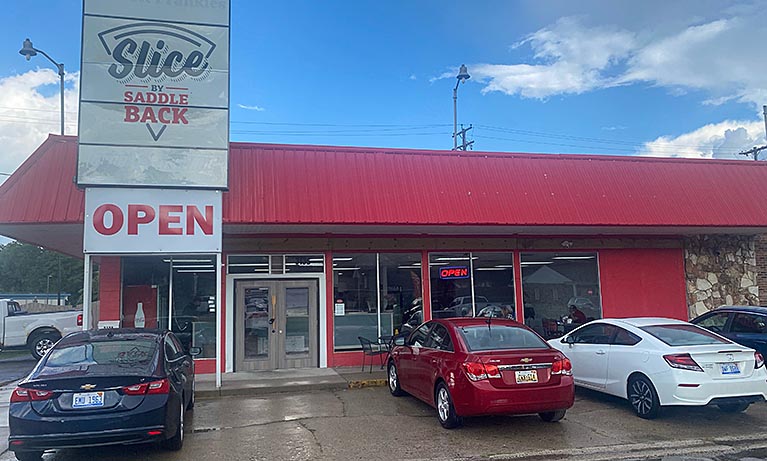 Slice by Saddleback is located at 3135 S. Pennsylvania Ave. in south Lansing. Photo by Chloe Gregg

Slice by Saddleback is a new-to-the-area pizza place in South Lansing. It is located at 3135 S. Pennsylvania Ave. and is open every day from 11 a.m. to 8 p.m.

There is a second Slice by Saddleback restaurant located at 644 Migaldi Lane, Suite 200, and this one opens at the same time and closes at 9 p.m.

The new pizza place on South Pennsylvania Avenue took over the Detroit Frankie’s and Good Truckin’ Diner mashup that had been there, which I reviewed previously.

Slice by Saddleback offers wood-fired pizzas by the whole pie or by slice for competitive prices. Each slice is a quarter cut of a full pizza and sells for just over $5 per piece. Full pizzas are usually right around the $20 mark, depending on added toppings.

I got the supreme and Hawaiian pizzas to try as well as the cheese bread. The cheese bread was definitely the star of the show! It was both creamy and crunchy, and the marinara given with it was delicious to dip in as well.

Both pizzas had that signature wood-fired yummy crust and tasted fantastic. I would say it was on par with Blaze Pizza.