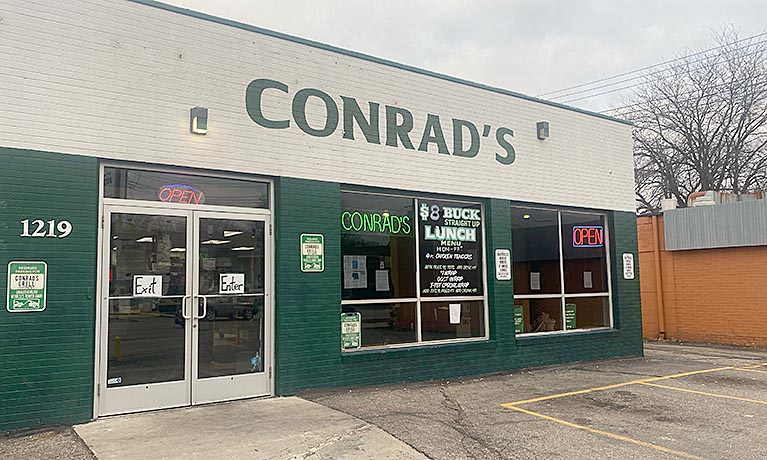 One of my new favorite restaurants is Conrad’s Grill. Conrad’s currently has two restaurants in the Greater Lansing Area, but only one of them is open right now.

Conrad’s offers takeout or pickup. There is no dine-in, as this is a very small restaurant. Conrad’s serves a collection of different iconic American dishes, from fried mac and cheese bites and burgers to wraps.

Personally, I am not a big fan of the fried mac and cheese bites, but my boyfriend, Kobe, loves them, and always gets them with his order. He also usually gets a Giant Con-Wrap known as “The Dweeb.” “The Dweeb” is filled with chicken tenders, cheese, tater tots, mac and cheese bites and extra ranch. It’s as good as it sounds, he says.

I, always the spice fiend, often get “The Vindaloo.” This is another giant wrap, filled with grilled chicken, cheese, tater tots, mac and cheese bites, Jalapenos, onions and vindaloo sauce. It is very good!

I have also enjoy the “Jemalty,” which is another giant wrap.

I cannot say what Conrad’s sandwiches tastes like, but if they are anything like its wraps, they are worth a try.