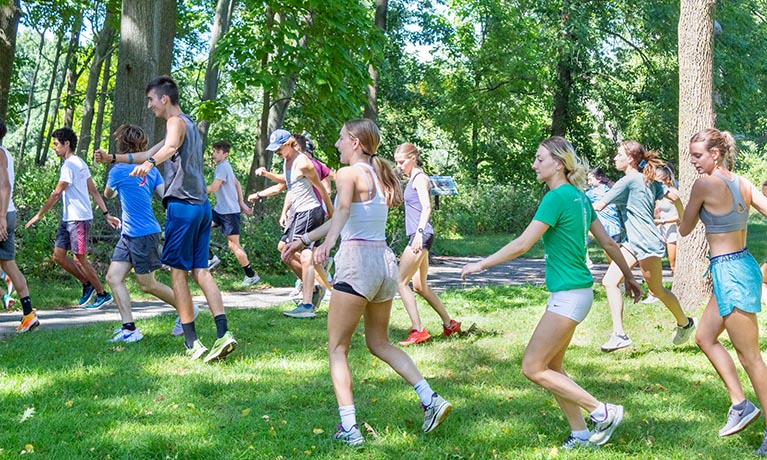 The LCC men's and women's cross country teams warm up prior to running during practice at Grand Woods Park on Lansing's west side. Photo by Julie Newell

Fall sports have begun at LCC, including the men’s and women’s cross country teams.

Robinson said the men’s team is determined to be champions this season after finishing fifth at the national championship last season.

“Our men were fifth last year and they had a chance to see what the championship-caliber team looks like, and they really made a commitment to be in the hunt to be champions this year,” Robinson said. “They put in the work; I think we’re where we need to be to be contenders for that.”

There are a total of 15 runners on the women’s team, including seven returning athletes and eight new ones.

“Both teams represent the best collection of distance running talent we’ve ever had in my time here, and probably ever,” Robinson said.

On the men’s team there are a total of 21 runners, which includes seven returning athletes and 14 new ones.

“This is by far, in terms of potential, the best men’s group I’ve had,” Robinson said.

According to Robinson, the biggest challenge the teams will face this season is focus.

“College athletes have a lot going on between studying and working and having a life outside of their commitment to cross country, but if you’re going to do well at cross country, you’ve got to stay focused,” Robinson said. “It’s also an endurance sport and you’ve got to sustain that over the course of the season.”

The Stars compete in their first meet at the Comet Open in Charlotte on Thursday, Sept. 1.