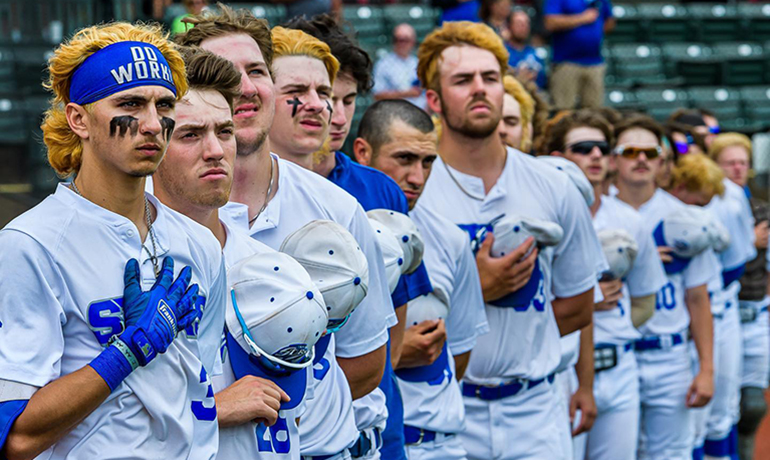 The LCC baseball team lines up for the National Anthem during the Division II College World Series on Enid, Okla. Many of the Stars dyed their hair blond to show team unity. Photo courtesy of Kevin W. Fowler for LCC.

The LCC baseball team competed in the NJCAA Division II World Series tournament for the first time since 2017 from May 28 to May 31 in Enid, Okla. The Stars won one of three games and ended up fifth in the nation in Division II.

“It was quite an experience in Enid … to see the fanfare; to see a whole town really support the World Series,” LCC first-year Head Coach Steven Cutter said.

“We were welcomed at our hotel by a lot of parents and a little league team in Enid; they kind of took us under their wing. They showed us around town and supported us at all of our games. We did a lot of different things with them. Everything that happened outside of the lines was equally as amazing as what happened inside the lines. Being there, it was just a really special experience.”

The Stars hit the ground running, winning 13-2 on May 28 in their first game of the double-elimination tournament against Frederick Community College.

“We opened up with playing the number two team in the country,” Cutter said. “We just played with a little bit more of a mission than they had. It was a pretty incredible game, and we were thankful to get out of there with a win.”

Freshmen Robert Cavin and Brendan Ham led LCC with four hits each in the win. Ham had five RBIs.

Sophomore Grant Dittmer led LCC on the mound, pitching seven out of nine innings and striking out nine batters.

The Stars lost 17-8 on May 30 against top-seed Pearl River Community College.

Despite the loss, freshmen Payton Mazzola and Chris Hege each had two hits in the game, including a home run by Hege.

“It was a back-and-forth battle in game number two,” Cutter said. “We didn’t have enough pitching to win that game and we lost. It was an extremely emotional loss.”

The Stars ended their World Series experience in their third game, losing 7-0 against Florida State College on Tuesday, May 31.

“We just came out really flat,” Cutter said. “We were emotionally spent from the game the night before and just didn’t have enough pitching once again.”

Freshman Hunter Lay led the Stars at the plate with two hits against the Florida State team.

The Stars finished the season with an overall record of 44-11.

“It was a good year,” Cutter said. “We were able to accomplish a lot with what we had, so this season had a lot of overachievement.”

Dittmer led LCC in pitching, tossing 77.1 innings with an ERA of 2.09 for the season.