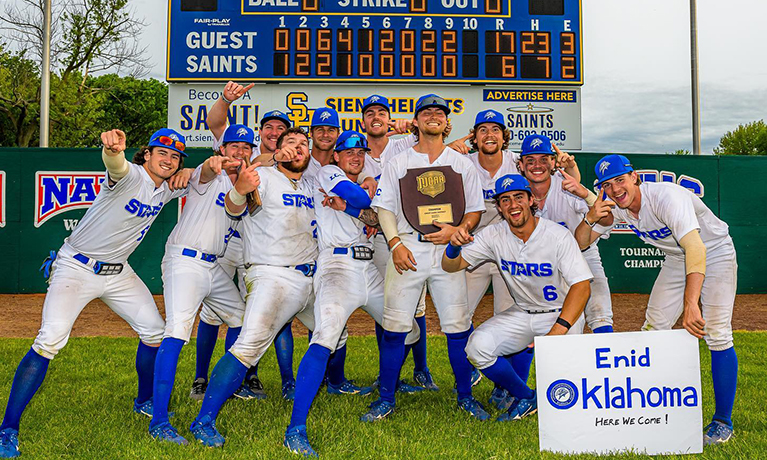 The LCC baseball team celebrates its regional championship in Adrian on Saturday, May 21. Photo by Kevin W. Fowler for LCC

The LCC Stars baseball team came out victorious in the double-elimination tournament this past weekend, securing a spot in the NJCAA Division II World Series. The tournament was played in Adrian.

This put the Stars into a Saturday, May 21 matchup with Kellogg Community College, the team that had ousted LCC from the tournament last season. LCC lost the first game 8-6 to Kellogg, but came back in the second game, winning 17-6 to clinch the championship.

“They have been confident all season in their abilities and in each other, and their belief system is extremely high,” LCC Head Coach Steve Cutter said. “They believe in each other and, when you have that, that’s one of the best things you could ever have when you’re coaching any sport.”

This is the first time the Stars have advanced to the World Series since 2017, and only the second time in LCC’s history.

“It’s something we talked about the whole year; we envisioned it,” freshman outfielder Blake McRae said. “We expected to be here, but I think for a lot of the returners, coming so close last year and coming up short, its surreal in a way.”

Despite losing the first game against Kellogg, McRae led LCC at the plate with two hits, including a home run.

“The first game against Kellogg we did not win,” Cutter said. “But if you were able to step back and remove yourself from the actual game, it was a really, really great baseball game.”

Cutter said after losing the first game, there were many players and fans who thought this might be a repeat of last year, when LCC lost the regional championship to Kellogg and was unable to move forward to the World Series.

“That first game was a pretty crazy, exciting baseball game and they (Kellogg) ended up pulling in front at the end, which sucked,” Lay said. “But at the same time it’s what we have been working toward the whole year and preparing for, mindset wise. Our preparation paid off in that second game, and we outlasted then and ended up winning.”

In the second game, freshman catcher Noah Bright led the Stars at the plate a with five-for-six performance, including a home run and three RBI. McRae, Robert Cavin, Shane Juday, Ryan Rifenberg and Chris Hegge all had three hits for LCC.

Freshman Noah Megyesi was the starting pitcher for LCC. He tossed three and two-thirds innings. He struck out three.

Lay said he is looking forward to the national tournament.

“It’s super exciting; the first time since 2017 and it’s what we’ve been working for this whole year,” Lay said. “We are playing for all the guys that have ever played for LCC. This World Series is for us, obviously, but for all the past players too.”

The Stars are scheduled to begin play in the NJCAA Division II World Series tournament against Frederick Community College on Saturday, May 28 in Enid, Okla. LCC goes into the tournament as the five seed. A total of 10 teams will be competing.

“Our main focus now is getting our players refocused on moving forward and not just being happy to go to the World Series.” Cutter said. “We’re just trying to focus on going there to win it.”