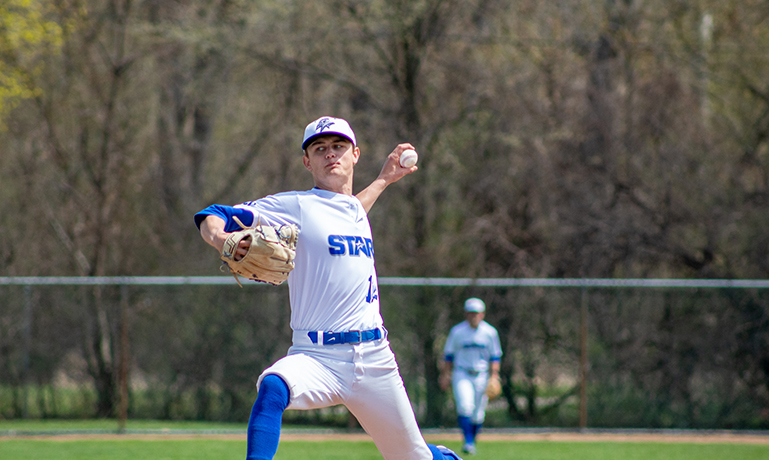 The LCC baseball team competed in the best-of-three NJCAA Region XII Division 2 quarterfinals against Henry Ford College on Thursday, May 12 and Friday, May 13 at Municipal Park in Lansing.

The Stars split a doubleheader on the first day, winning the first game 4-3 and losing the second game 3-1.

On Friday, the Stars won 10-1, securing their spot in the regional finals.

The Stars are scheduled to open play in the NJCAA Region XII Baseball Championship against Edison Community College on Thursday, May 19 in Adrian.

“It’s a double-elimination tournament, so we hope to punch our ticket to the College World Series when we are done there,” LCC Head Coach Steve Cutter said.

In the first game of the quarterfinals against Henry Ford College, infielder Brendan Ham mashed a home run and outfielder Payton Mazzola hit a sacrifice fly to help the Stars to victory.

Sophomore Grant Dittmer led the Stars on the mound, facing 29 batters and striking out 11.

“(In the first game) we scored four runs early between the first and second innings and then the bats pretty much went quiet,” LCC Head Coach Steven Cutter said.

Cutter said the team’s bats were really quiet in the second game.

“It’s the first time all year that we haven’t hit in that many innings, so it was really sort of surreal watching them not hit,” Cutter said. “It’s really one of our strengths of our team, and has been all year.”

“It was really important that we regroup the next day and put out best foot forward to take the series,” Cutter said. “That is something we have been working on since our season began; how we react to adversity really determines our success.”

“We came out, we scored five runs in the first inning, and it was pretty much over from that point,” Cutter said. “We won 10-1 and secured a spot in the regional final four.”

“Overall, they’re such a close-knit group of young men, they pull for each other and find ways to make things happen,” Cutter said. “(I’m) super proud of them to respond to adversity of losing that game two and (to) show up in a game that is basically, you win or your season is over.”