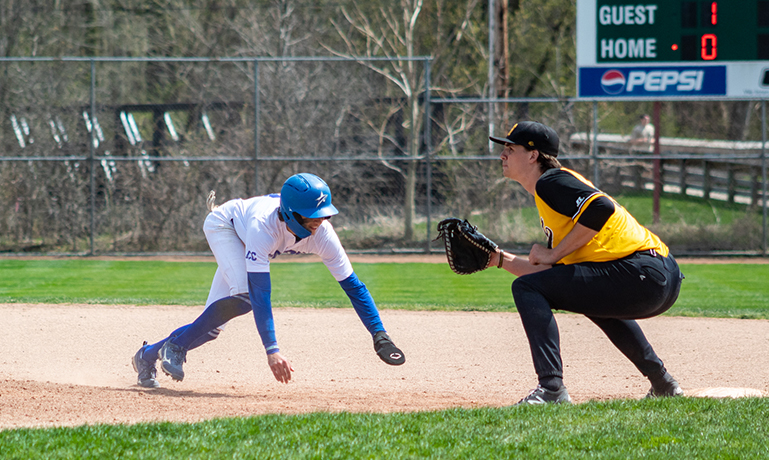 LCC's Payton Mazzola dives back into first base on a pickoff attempt against Mott Community College at Municipal Park in Lansing on April 29. Photo by Julie Newell

The LCC Baseball team swept two games from St. Clair Country Community College on Saturday, May 7, winning 10-2 in the first game and 22-2 in the second game.

“The weather was nice, so that’s very unusual for us … that was pretty nice,” LCC Head Coach Steven Cutter said.

LCC finished the regular season as the MCCAA Eastern Conference Champions, ending with an overall record of 38-7, and a 27-1 in the conference.

“I think we’re in a good spot; we have won 36 of out last 38 baseball games and that’s a pretty incredible thing to do in baseball alone, at any level,” Cutter said. “So, I think we are in a good spot, and securing the number one seat (in the league) helps us in our regional tournament.”

Freshman Brendan Beaver led LCC on the mound in the opener, striking out 12 batters.

Outfielder Payton Mazzola led off the second game at the plate with a home run. Outfielder Blake McRae, Lay and Juday also had home runs in the nightcap for LCC.

Freshman Elijah Stark led LCC on the mound, pitching four out of five innings and striking out four batters.

“It was quite an offensive showing for two games,” Cutter said.

The Stars now head into post-season, starting off the NJCAA Region XII Division 2 quarterfinals against Henry Ford College on Thursday, May 12. Action will start at 1 p.m. at Municipal Field in Lansing.

The Stars will face Henry Ford twice on Thursday. A third game, if necessary, would be played between the two teams the following day in the best-of-three series.