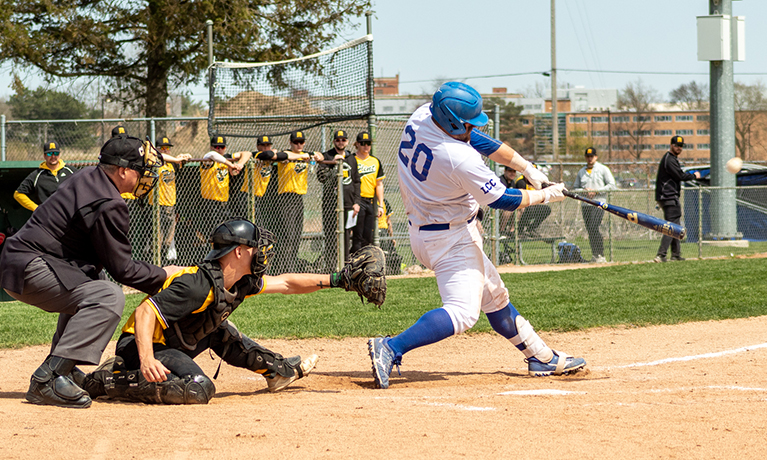 LCC designated hitter Bobby Cavin connects for a grand slam homer run, into the teeth of the wind, during LCC's first-game win over Mott Community College on Friday, April 29 at Kircher Municipal Field in Lansing. Photo by Julie Newell

The LCC Baseball team swept four games from Mott Community College over the weekend, clinching the MCCAA Western Conference championship in the process.

A highlight of the Friday home sweep was a first-game, third-inning grand slam to left field by LCC designated hitter Bobby Cavin. The bomb gave LCC a 4-1 lead and the Stars never looked back.

In the second game on Friday, Lay registered three more hits, including a homer, and Cavin had three RBIs. Brenden Tome got the win in relief for LCC.

On Saturday at Mott, LCC won the first game with help from a homer by second baseman Shane Juday and strong pitching from Brendan Beaver, who hurled all seven innings and fanned eight batters.

In the second game at Mott, shortstop Chris Hege had two hits and drove in all four runs for LCC. Elijah Stark pitched a complete game shutout to earn the win.

The Stars will be back in action this Friday, May 6, with a doubleheader at St. Clair Community College. St. Clair will then come to Municipal Park in Lansing on Saturday, May 7 to battle the Stars in another twinbill. Action begins at 1 p.m.