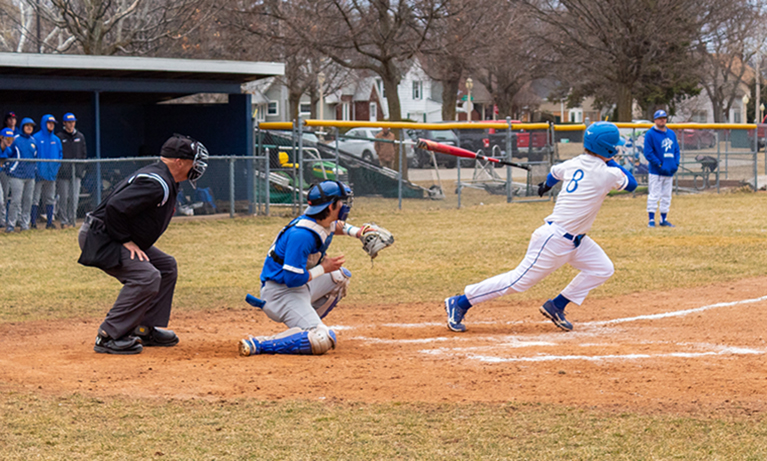 LCC's Noah Bright heads for first base after connecting during action earlier this season at Westside Park in Lansing. Photo by Julie Newell

The two wins put the Stars’ overall record at 25-6. LCC is 15-1 in the MCCAA Western Conference.

“We have won 23 of our last 24 games, and we are playing really well together,” LCC Head Coach Steven Cutter said. “We have yet to be back at full strength, with nagging injuries still hanging on.

“The one thing you can count on with this team is a never-say-die attitude and great energy for each other,” Cutter said. “They are a team that is very happy about each other’s successes.”

According to Cutter, the Stars fell behind at the start of the second game, but picked it up in the third inning when they scored three runs.

Freshmen Isaac Toole and Jack Franco pitched early in the game. Brenden Tome secured the win at the end.

Freshmen Chris Hege and Blake McRae led the Stars at the plate, each blasting a home run in the second game.

“We are excited about the upcoming series with Delta,” Cutter said. “The weather is finally starting to break, and this series will be a big one if we want to get one step closer to winning the Eastern Conference.”

The Stars are scheduled to play at Delta College today (Friday, April 22).

“Our next home game is this Saturday, and we will be welcoming East Lansing Little League to take part in pre-game activities on the field,” Cutter said.

The Stars are scheduled to play at home against Delta College on Saturday, April 23 at Kircher Municipal Park in Lansing. Action stars at 1 p.m.