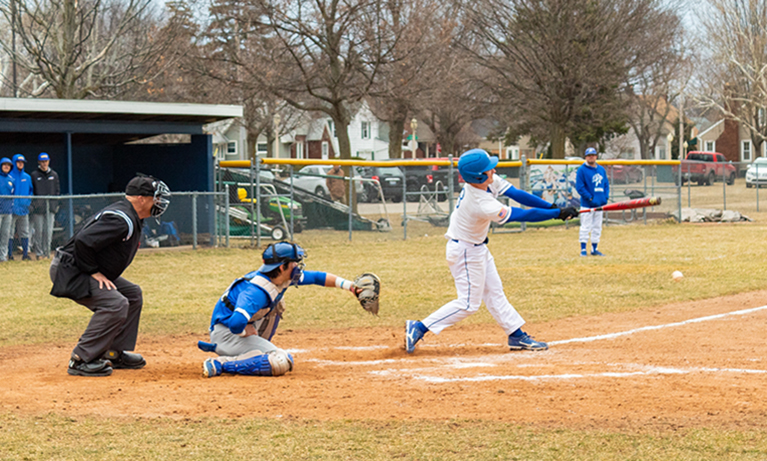 LCC's Noah Bright puts the ball in place during atction at Westside Park earlier this spring. Photo by Julie Newell

LCC’s baseball team ran its winning streak to 12 games by sweeping a doubleheader at Macomb Community College on Sunday, April 3.

The Stars won 8-2 in the opener and 12-2 in the nightcap, improving their overall record to 14-5 and their MCCAA Western Conference mark to 8-0.

In the first game, Lansing put up five runs in the sixth to seal the win. Noah Bright, Payton Mazzola and Hunter Lay drove in runs during the inning.

Chris Hege, Jace Preston and Blake McRae each had two hits in the first game. McRae and Mazzola each had two RBIs.

Brendan Beaver was the winning pitcher in the first game. The lefty went five and two thirds innings, allowing two runs and three hits while striking out nine and walking one.

In the second game, McRae and Brendan Ham each had two hits. Ham led the team with four RBIs. Gabe DeBoer hit a home run for LCC.

Elijah Stark was the winning pitcher for LCC. The righty lasted four innings, allowing five hits and two runs while striking out four.

“The team continues to play pretty well through poor weather conditions,” LCC Head Coach Steve Cutter said. “Even though we have won our last 12 games, we still are not playing the type of baseball we are capable of playing.”

“I hope that with a continued focus on practices and development, we will clean up some of our mistakes,” Cutter said. “Jackson only has one loss in conference play, and this weekend's games should be very good.”

The Stars are scheduled to play on Tuesday, April 12 at Grand Rapids Community College.