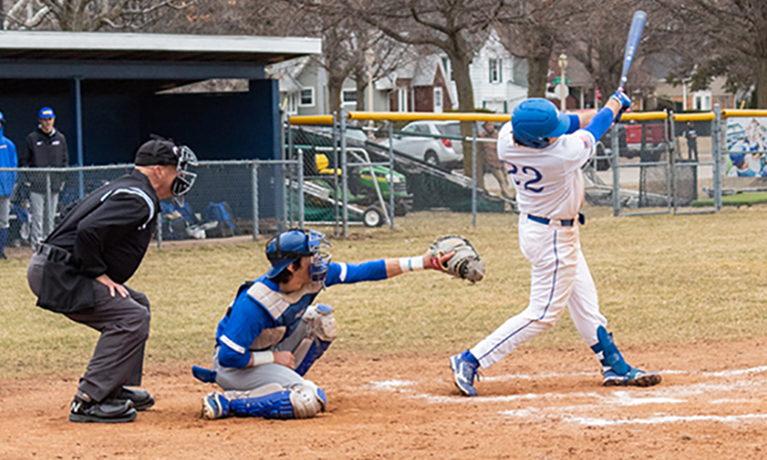 The LCC Stars baseball team won its first doubleheader at home against Muskegon Community College on Friday, March 18. The Stars won 4-1 in the opener and 23-3 in the nightcap.

“It was a cold day at Wilson Park, but the Stars put on a show for both games,” LCC Head Coach Steven Cutter said.

The wins put the Stars overall record at 6-5.

“Grant Dittmer got the win in game one, allowing one run over seven innings and striking out 13,” Cutter said.

“Brendan Ham led the team at the plate, hitting a home run and accounting for three of the four RBI,” Cutter said.

In the second game, LCC scored 12 runs in the first inning and never looked back. The Stars finished with 25 hits in just five innings.

Freshman Payton Mazzola led the Stars with seven RBI in the second game. Mazzola, Ham and freshman Hunter Lay each had a home run for LCC.

The Stars had two doubleheaders postponed this week due to inclement weather. Cutter said the weather has been the biggest struggle for his team so far this season.

“Already having to cancel 12 games in the young season,” Cutter said. “We are playing some excellent baseball when we can actually get out and compete. The weather is always something that is a wildcard in the spring season, and the cards have not been in our favor as of late.”

According to Cutter, the Stars’ home field at Wilson Park was flooded, as of March 24.

“Our home field is underwater, so the City of Lansing has graciously allowed us to play Saturday's game at Kircher Municipal Park,” Cutter said.

The Stars are scheduled to play at Schoolcraft College today (Friday, March 25).

The Stars are scheduled to play against Schoolcraft College in a home doubleheader at Kircher Municipal Park on Saturday, March 26.