The Lookout 1964 Features A look back 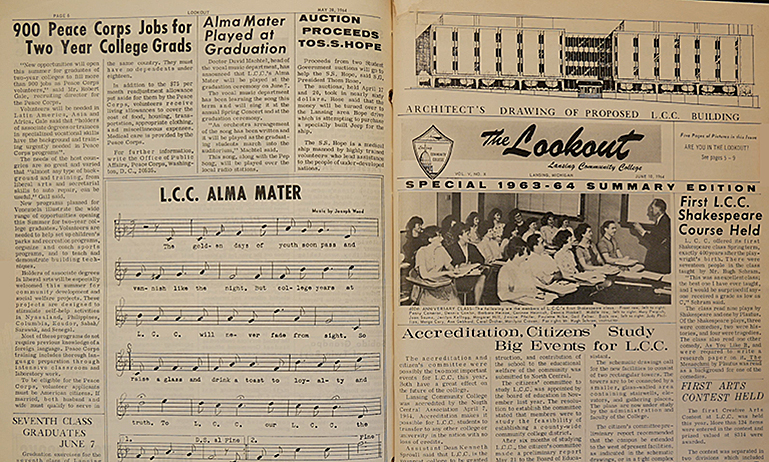 Pages from the June 10, 1964 edition of 'The Lookout' are pictured. The top of the front page includes an artist's rendering of the soon-to-be-built Arts and Sciences Building.

Several months ago, I wrote a story about the oldest bound edition in our archives. I must have had some old dust in my eyes or something, since I recently discovered an even older edition sitting neatly on the shelf.

I have selected several stories to look back at from the last four editions of The Lookout from the 1964 school year.

The April 22 edition features a front-page story announcing that LCC had been officially accredited by the North Central Association. This made it possible for LCC students to transfer anywhere in the country with no loss of credits.

This appears to have been a big deal at the time, and would go on to be fundamental to the identity of our college, with many LCC students relying on LCC as a transfer platform today.

The April 22 edition also contains a story on page 6 about a raise in tuition rates. Tuition for resident students was raised from $3.50 a credit hour to $4.75 a credit hour.

A 35 percent increase in tuition would certainly be a significant increase, but I think most modern students would be astounded to know that tuition once cost less than a 10th of what it does now. How would students from 1964 react to the cheapest possible LCC tuition rate in 2022 being $114 per billing hour?

The May 11 edition contained no news stories, and instead featured a writeup about a recent creative arts contest at LCC. The paper presented photographs of the winning paintings along with several creative writing excerpts.

This was a nice way to showcase the winners but it does seem strange that the newspaper would simply ignore news that week.

The May 28 edition contains a printing of LCC’s official Alma Mater, with a story explaining how an orchestral arrangement of the song was written to be played at graduation. I did not even know LCC had an Alma Mater.

The song opens with the line, “The golden days of youth soon pass and vanish like the night, but college years at LCC will never fade from sight.” This is a fine sentiment, perhaps, but I cannot help but feel that the song may have stayed relevant at the college longer with some more uplifting lyrics.

The June 10 edition contains a story on page 11 about enrollment at LCC reaching a record high. The story reports that there were 2,320 students in the fall of 63.

The story describes how the college had grown quickly since its first semester, with 425 students in the fall of 1957. Not too bad for a college that regularly has over 10,000 students enrolled these days.

The June 10 edition served as something of a year in review and also contains several pages of pictures from the school year. The clothing styles are quite different, but the pictures of students do not look too much different than those we would take today.

Overall, these four editions did not contain many shocking revelations about the past, but did give an interesting glimpse into the early days of LCC and the issues facing the young college.