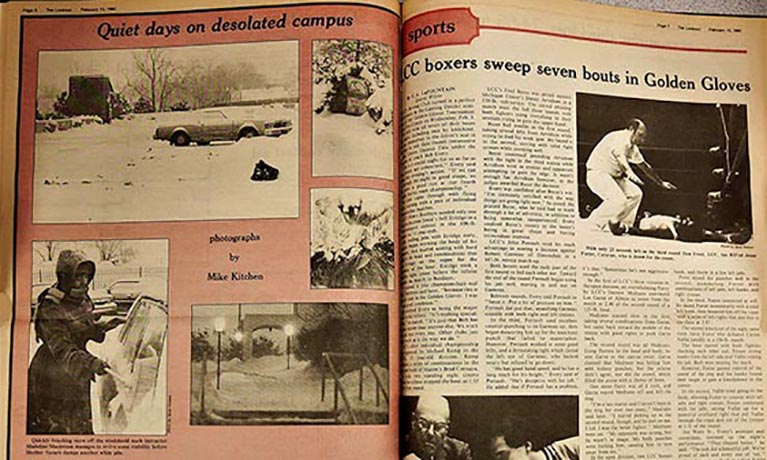 The front-page story on that date is about snow-day closures of LCC. The story describes how and why snow days were decided. The snow storm of Feb. 2, 2022, showed us that snow can still close campus.

This story is the perfect example of a story that is not too different from one we would publish at The Lookout today. In fact, we just recently published an editorial about the dangers of driving on icy roads.

On page 2 of the 1982 edition is a story that is also similar to those we would write today, but the object of focus is nowhere to be seen on our campus these days. The story explains that the typewriter room has been moved to a new location.

Computer labs get moved around campus today, and things were no different back then, just with fewer power cables to move around with it.

In 1982, LCC was just beginning to adapt to new technologies. On the third page are two stories about a new computer in the library. This computer’s whole function was to serve as a library catalog.

One story includes comments from students who are unconvinced of the new technology’s usefulness.

“I love them when they are working, but they are not working enough for me,” said Bonnie Bublitz, a photojournalism major. In six attempts to use the library computer, she said she was able to use it once.

It seems computers have been confounding us from their genesis. At least the technology help desk seems to be faster these days. The other story on the 1982 page describes how a replacement part to repair the computer will take six weeks to arrive.

The sports section from 1982 revealed that LCC once had a boxing club. The club had just taken part in the Lansing District semifinals of the Golden Gloves tournament, at which they won all eight of their bouts.

The sports section in 1982 also includes a look back at our own adviser, Larry Hook, back when he was the sports editor for The Lookout and a student at LCC. Larry wrote a story about the women’s basketball team that sounds just like one we would write today.

In his column in the same issue, Larry criticizes the NHL for its rough play and says he sees no reason to watch the sport descend into violence. They must have cleaned up their act, since a Red Wings poster hangs in his office today.

This edition carried a few glimpses of the challenges society faced at the time.

Included in the opinion section of 1982 is a letter from Christopher Duchene who is calling for welfare programs to be cut, instead of taxes raised.

“I personally can’t see any reason for me to pay more money into a system that will be broke when I want to collect my benefits in 40 years,” Duchene wrote.

He does not mention what specific programs he expects to have failed, but 40 years have passed. I would love to know if Christopher Duchene collects Social Security today.

The opinion section in 1982 also contains several pieces critical of Ronald Reagan and his economic policies. It seems people of the time already understood that trickle-down economics did very little for the common person.

This edition of The Lookout contains very similar material to that which we would write today. While technology and society continue to evolve, the interests of college students remain the same in many ways.