'The Lookout,' a look then and now 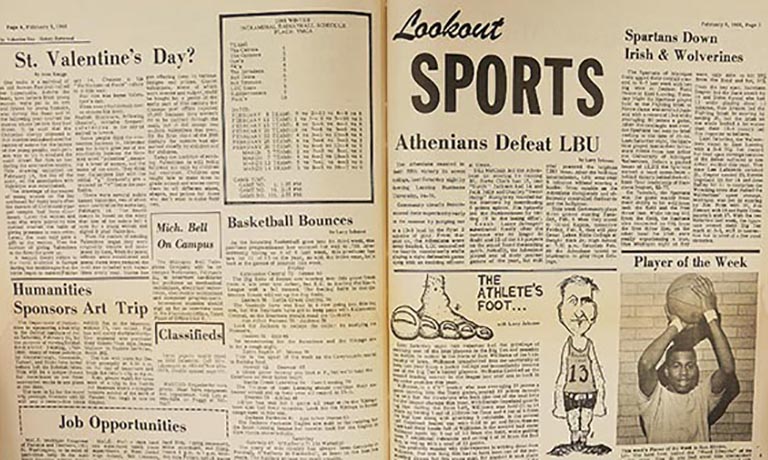 This story is a look back to exactly 54 years ago at the archives of The Lookout, to the Feb. 8, 1968 edition.

Like the other editions I have covered, this edition contains some stories that feel just like those we write today. However, it also contains some darker parts of history, which give unfortunate context to the time period.

The front-page story includes a discussion about the safety of the Old Central building on campus. This building had been the primary classroom facility at LCC until the completion of the A&S Building in 1967. The Old Central building was demolished in 2006. The space it left was replaced part of the University Center and an adjoining parking lot.

I was pleased to discover that The Lookout once featured a regular column about sports cars by Columnist Dave Westol. This edition discussed the emergence of flashy advertising to sell cars.

Westol seemed excited by the popular perception of cars evolving to portray them as exciting machines. Car advertising has continued to evolve since then, but many manufacturers continue to generate excitement for fast cars with quick flashy ads.

This 1968 edition also includes a section dedicated to listing local job opportunities. This must have been a wonderful resource to students at the time, but it contains a key difference to modern job postings.

All the job openings listed begin with what specific gender the applicant should be. The jobs listed for females were typist, secretary and stenographer, all of which essentially boil down to operating a typewriter.

The jobs offered to males were not much more exciting, like mail room attendant or accountant, but it seems ridiculous today that there existed such a division in what sort of jobs a person could get based only on their gender.

Finally, this 1968 edition contained a rather shocking and unpleasant discovery. The paper had a section where readers could write in to voice their opinions and respond directly to the writers of the paper. One very negative response was to columnist Greg Davenport.

Davenport wrote a column called “Davenport Speaks Out,” which discussed events that made news and controversy. In this particular edition he discussed the potential Republican candidates for the 1968 presidential election.

The reader response in question, however, related back to a previous edition in which Davenport was critical of the police response in the recent 1967 Detroit riots. This person, who did not give a name, wrote in to the paper to disagree with Davenport’s views.

Here is part of the text of the comment.

“I agree with you that the white authorities in Detroit mishandled the riot last year. But I agree for different reasons.

“They should have moved in immediately with troops and ammunition to stop the wanton lawlessness. I do not advocate an immediate shoot-to-kill policy, but as soon as it becomes obvious that the situation will get out of hand, weapons should be used.

“I believe this policy should be used whether the rioters are Negroes, whites, yellows, or reds. Unfortunately, it’s the only way to deal with insurrectionists.”

The response signs off with the identifying phrase, “White Power.”

This person appears to have been writing in to attack Davenport’s ideas for several editions of The Lookout, always signing off with the phrase “White Power.”

In future editions other readers came to the defense of Davenport with their own opinion pieces, tearing down the “White Power” arguments.

I was personally shocked to see such an inflammatory comment published on the front page of The Lookout. This comment seems very similar to me to the sort of comment one could see today left by an anonymous poster on social media.

This person’s ideas seem very dangerous. They also completely destroy their credibility by identifying themselves with the phrase “White Power” and they just end up sound like a raving racist.

We still deal with problems related to appropriate force by the police and race relations. This comment shows a time around the height of the civil rights movement when such issues were even more serious and divisive.

This 1968 edition of The Lookout had some fun windows into the past, but also serves as a reminder of the problems facing that time in history.