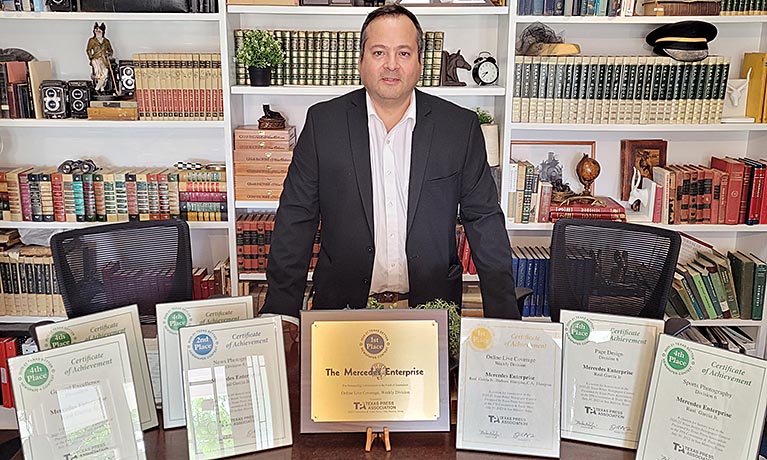 Raul Garcia Jr., the 2004 editor in chief for LCC’s student newspaper, The Lookout, recently earned seven awards at the Texas Press Association Awards Luncheon for his work as editor of the Mercedes Enterprise newspaper.

“It’s been a long time coming for me to try and reach something like this and be recognized,” Garcia said. “I looked over all of the work we did and submitted our best to the contest officials in early February.

“In May we were alerted we had won, but the announcement of the contest winners would not be revealed until the end of the Texas Press Association’s annual convention. I waited a very long time for this and put in a lot of hard work and hours covering the city of Mercedes to make sure the newspaper had strong news clips to go up against the newspapers across the state in the contest.”

“I started at The Lookout,” Garcia said. “One of my most cherished times in my experience with journalism is hanging out in that newsroom. It was a short time, but was everything I needed to get prepped for the next level.”

Before The Lookout, from 2001 to 2002, Garcia worked as a student at The State News at Michigan State University on the Loop special section.

After his time at The Lookout in 2004, Garcia worked at the City Pulse and a Latino-based magazine. He also did some freelance work for the Lansing State Journal and its Home Works special section.

Currently, he is the editor of the weekly Mercedes Enterprise, which has been in business for over 100 years. He has also launched his own online newspaper called “Dawn of News.”

Garcia continues to find new stories to cover and new ways to cover them at the Mercedes Enterprise. With Texas’ big football season coming up, Garcia is preparing a new way for townsfolk to get their football season information.

“I’m working on creating a special news tabloid for our weekly newspaper that will be the high school football preview,” Garcia said. “I’m working on writing stories for the area football teams right now. We’re taking pictures and shooting phone interviews about their mindset coming into the season.”

Garcia’s newspaper, Mercedes Enterprise, can be found online here. The current staff of The Lookout offers congratulations to our alum on receiving so many awards and for the success of his newspaper.