'The Lookout,' a look at then and now 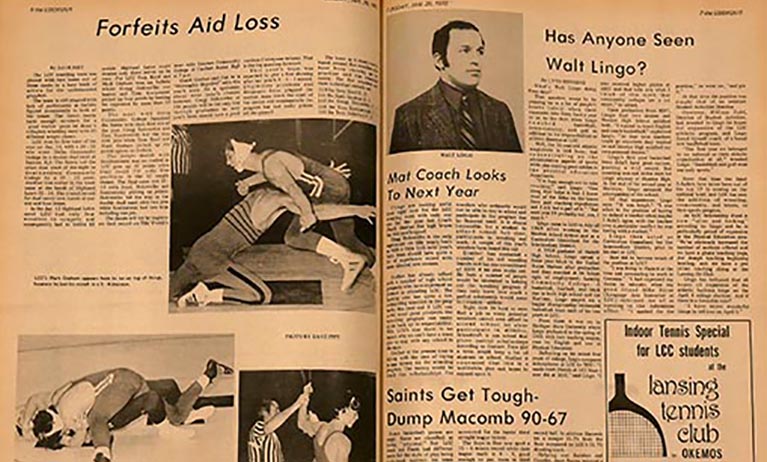 When one takes a look back at history it is often easy to find comparisons to today.

This story is a look back to exactly 50 years ago into the archives at the Jan. 25, 1972 edition of The Lookout.

The front-page story is a piece on a recent drug-abuse seminar that was offered at LCC.

The seminar was offered for credit for Law Enforcement students, but proved to be popular with the rest of the student body as well.

The story includes this interesting line: “According to the Bureau of Narcotics and Dangerous Drugs, there are 415,000 junkies currently residing in the United States.”

This sentence reveals just how serious the drug problem was at the time in this country. As a journalist I also find this sentence to be interesting due to the use of the very not-politically correct term “junkie” being used in official statistics.

On the second page, a short but very important story can be found. Bill Petry was announced as the chairman of the newly formed Human Relations and Minority Affairs Committee.

Petry was a math instructor at LCC when he took on this position. One of his first jobs in this role was to help instructors look for racist innuendos in textbooks, and decide which to choose for their class.

The story says this was “the first step taken by the committee toward its goal of dealing with racial and human relations problems at LCC.”

With the week of Jan. 17 being declared Racial Healing and Transformation Week at LCC, we can see that the battle against racism is still going at LCC. Petry could be seen as the past counterpart to current LCC Chief Diversity Officer Dr. Tonya Bailey.

The sports section of the paper reads very much like the sports stories my colleague Julie Newell writes today. There is a story about the basketball team beating Macomb Junior College in a very physical game. The story includes an interview with the coach that sounds just like our recent basketball stories.

Also interesting is the fact that apparently LCC used to have a wrestling team, but it appears the team was very unsuccessful that year. The most shocking revelation on the page, however, is that the LCC Stars used to be called the LCC Saints.

There is a story about what Walt Lingo was doing after he left as coach of the basketball team that year. The story is made infinitely more interesting by the inclusion of a picture of Lingo in a hilariously dated plaid suit that could have only been cool in the ‘70s.

Finally, there is a story that is very indicative of the times and the challenges college students faced. On the fifth page is a short story detailing the recent changes to the draft regulations right at the height of the Vietnam War.

The story mentions that undergraduate students would no longer be eligible for deferment, which must have been terrifying for young college students to read. It serves as a dark reminder that the past is not always rosy.

For the most part, this 1972 edition of The Lookout seems quite similar to what we release today. Some major things have changed after 50 years, but many of our accomplishments and challenges continue.