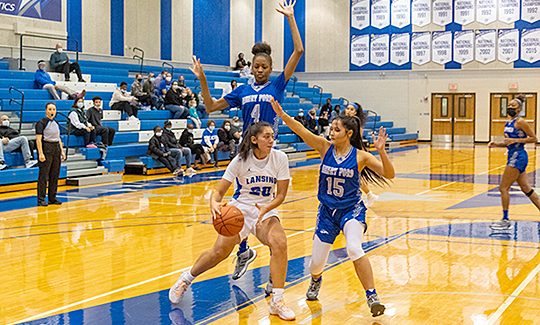 "My team and I fought hard; just made small mistakes that we can fix," LCC freshman Skyy Lockhart said.

The Stars' record fell to 1-4 overall.

"We were down 20-4 in the first quarter; off to a really bad start," sophomore Jasmine Goins. "We played very great in the second half."

Freshman Emily Sinclair said she didn't have a great game.

"I didn't get a lot of time in the game because I picked up a lot of fouls early on," Sinclair said. "But, when I was in, I got a few rebounds."

Goins commented on how she played in the game.

"Personally, I did not play my best," Goins said. "I think I contributed eight points for the night. I did have a pretty good game defensively. I played smarter this game than I have in most games."

Sinclair said with more effort, the team could have won.

"We put in a lot of effort toward the end and, if a few more shots would have gone in, we would have had a good shot at winning," Sinclair said.

Despite the loss, Goins said she is still pleased.

"Me, as well as my teammates and coach, were pleased with the fact that we never gave up," Goins said. "We are really working hard on discipline, such as taking good shots, trusting our teammates and knowing when to be selfish."

The Stars were scheduled to play against Delta College at home in the Gannon Gym on Saturday, Dec. 4. Action starts at 1 p.m.

The Stars are scheduled to play against Calvin College JV at home in the Gannon Gym on Monday Dec. 6. Actions starts at 5:30 p.m.

"Our conference starts in January and we are slowly, but surely, becoming the team we know we can be," Goins said.