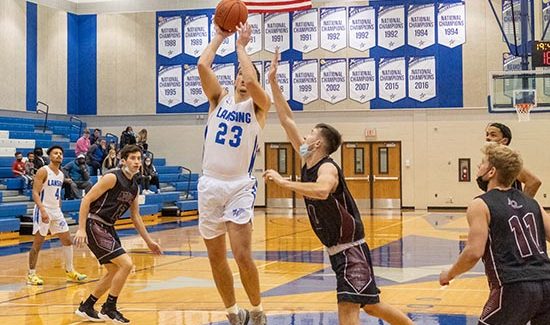 "We played solid in the first half," Freshman Sean Cobb said. "It was a tough game to play since they were hitting all of their shots."

This loss put the Stars record at 8-3 overall.

"We finished our non-conference schedule 8-3," LCC Head Coach Mike Ingram said. "I feel pretty good about it, because we didn't get beat by a team that couldn't beat us."

"Overall, it was a tough game to play, especially on the defensive part of the game," Cobb said.

"For me, non-conference games are to get ready for our first goal; the conference championship," Ingram said. "You give everybody a shot at playing time, you watch their learning curve, who's listening and who's getting better."

Ingram commented on the team's plans for after the semester break.

"When we get back to practice after Christmas the emphasis will be on the players that are ready to play at the college level," Ingram said. "By that I mean, can you be coached? Can you listen? Can you play hard without your coach trying to get you to play hard? Can you practice hard every day?"

The Stars are scheduled to return on Monday, Jan. 3, to play Kellogg Community College in LCC's first MCCAA Western Conference game of the season. The game will take place at home in the Gannon Gym. Action starts at 7:30 p.m.