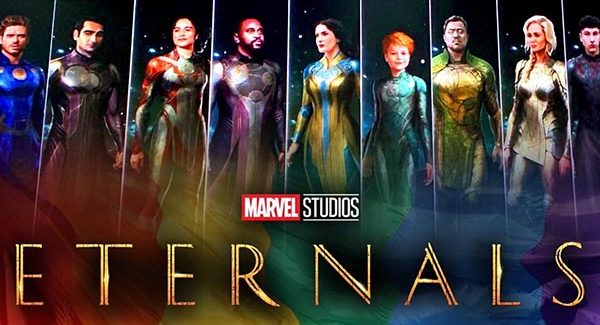 Due to the lockdowns that shut down the world due to COVID-19, film studios have had to either push back their new releases or cancel them until further notice.

Now many of the movies that were pushed back have been returning to theaters, including the Marvel movie "Eternals," which was released on Nov. 5.

The movie shows a group of immortal beings with superhuman powers called The Eternals who came to earth thousands of years ago to fight off evil alien creatures called Deviants. While on earth they also help the human race evolve and advance in life.

Once they had gotten rid of all the Deviants, they are told to stay on earth by their leader, Arishem, who is an ancient being called a Celestial.

The Eternals watched and helped humanity throughout history, however they were never allowed to get involved in any human wars or conflicts, to allow humans to evolve naturally.

After some time, the Eternals split up to live their lives however they want.

In the present day, Sersi and Spite get attacked by a Deviant, after they thought all Deviants were killed. However, this Deviant is different. It has evolved and grown bigger and stronger.

After being joined by Ikaris, Sersi and Sprite go off to find the other Eternals to figure out what is going on.

I enjoyed the movie and thought it was another great movie made by Marvel. It left the audience with more questions of how the Eternals will tie into the other movies.

One of the reasons I wanted to watch the "Eternals" was because of Lauren Ridloff, who is a Deaf actress. Being in the sign language interpreter program at LCC, I was excited to see positive Deaf representation in movies, especially as a superhero character.

This movie is what I call an "in-between" movie, meaning that it didn't add anything incredibly important to the overarching plot of the Marvel Cinematic Universe. And it wasn't groundbreaking, like "Infinity War" or "Endgame."

I do recommend this movie to Marvel fans, especially Marvel Comics fans.