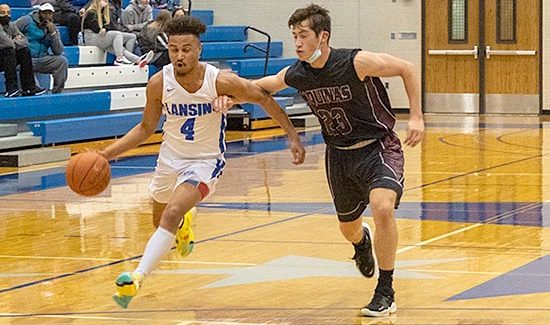 The LCC men's basketball team earned a 73-71 win against Delta College on Saturday, Dec. 4 at home in the Gannon Gym.

"We got off to a rough start both on offense and defense, but turned it around after halftime," LCC sophomore Drew Lowder said.

"It was a pretty good game," LCC Head Coach Mike Ingram said. "Delta came out and played really well and jumped on us.

"I felt like we could have played better overall, but we came out with a win," Cobb said. "I feel like I did OK overall. I felt like I needed to do better, especially on the boards."

"I think I did OK, but a player that had a great game was Jaylen Davison," Lowder said. "He turned things around for us defensively, which got our offense going."

Ingram said after he made a couple of substitutions, the game started to turn around for the better.

"(We) had to put Jaylen Davison in and then we had to put in Kyler Mills, because we thought we needed some guys that were going to go in there and play some defense," Ingram said.

Cobb commented on how the team did overall.

"Overall, we pulled ourselves out of that first half slump and did good in the second half, particularly on the defensive end," Cobb said.

The Stars are scheduled to play against number one-ranked Mott Community College at home in the Gannon Gym. Action starts at 3 p.m. Mott is the only team to have beaten the Stars this season.